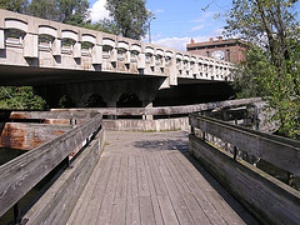 The Tridge, from Riverside Park to Frog Island and Depot Town.

The Tridge is a three-way foot bridge that connects Riverside Park, Frog Island Park and Depot Town. It is situated under the Cross Street bridge over the Huron River in Ypsilanti.

The Tridge is also noted for its role in the Smeet Frog Conspiracy. A faux-historical plaque detailing the history of the mythical frog was affixed to the Riverside leg of the tridge by parties unknown and remained there for several years before being removed.  The plaque has since returned to the Tridge as of 2013!