The Washtenaw Alano Club is located at 995 N. Maple Road. It hosts programs for the recovery community, including Alcoholics Anonymous. 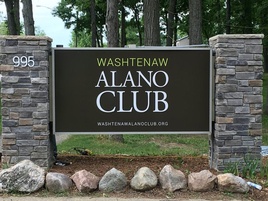 "The Washtenaw Alano Club is a non-profit corporation. Our primary purpose is to operate a vital support center where 12-step recovery programs can hold meetings, host social events and provide community-building opportunities for recovering alcoholics and addicts. We are driven by the belief that everyone deserves a chance at a life free from the imprisonment of active alcoholism and addiction."

August 16, 2015.  Alano Club name change, rebranding upset longtime members. Ann Arbor News. "In addition to changing the name to Maple Rock, the organization's board also stopped collecting membership dues in August 2014. The group did not officially change its designation with the state to a directorship—an organization run by its board rather than its members—but has effectively been operating as such since the elimination of membership dues."

Added in "Please describe this change" edit field on July 13, 2015: "As of July 14, 2015 The club now has signs calling it Maple Rock. Word is that the membership has been dissolved by the Executive Board"