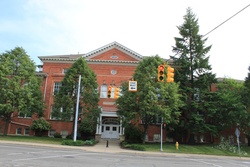 Welch Hall (built 1896) is a Colonial Revival building on the Eastern Michigan University campus, designed by the Malcomson and Higginbotham architecture firm of Detroit. Originally named the Training School Building, it was renamed in 1925 to honor Adonijah Strong Welch, the first president of the university.

The building was considered for demolition in the early 1980s, but a 1985 a federal grant included in an education bill passed by Congress saved the building and led to its adaptive reuse as administrative office space.