Wendy Ann Woods (b. 1949) is a former Ann Arbor city councilmember who serves on the Ann Arbor Planning Commission. 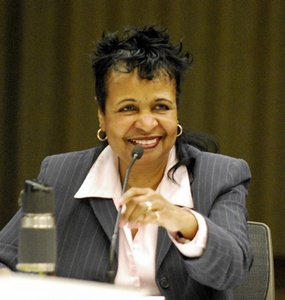 In 2007, she was defeated by Mike Anglin in the Democratic Primary. In 2006, she unsuccessfully challenged incumbent John Heiftje for the Democratic nomination for mayor of Ann Arbor.

She was appointed to the Ann Arbor Planning Commission in 2008, reappointed in 2011, and reappointed again in 2014 for a term ending June 30, 2017. In July 2014, she was elected as chair of the planning commission for a one-year term.

She is formerly a member of the Board of Directors for the Girl Scout Council of Huron Valley, the Board of the Ecology Center, and the Board of Trustees for Emerson School. She is a member of the Sierra Club, the National Wildlife Federation, the ACLU, The Links, Inc., Delta Sigma Theta Sorority, Inc., the National Association of Negro Business and Professional Women's Clubs, Michigan Women in Municipal Government, the Women's Progressive Activists and the Advisory Committee for the University Musical Society.

In 2001 she received the "Woman of the Year in Human Resources" award from the University of Michigan Women of Color Task Force. In 2005 she received the Ginsburg Center Award for Service and Social Action. She has also been honored by the U of M Assocation of Black Professionals, Administrators, Faculty and Staff. She received the 2006 Community Service Award from the Ann Arbor National Association of Negro, Business and Professional Women's Clubs, Inc.

She is married to Dr. Ronald Woods. They have been married for almost thirty-seven years and have five children and two grandchildren. She enjoys movies, reading, indoor gardening and playing the viola. She is the Associate Director of the Michigan Community Scholars Program (MCSP) which is a nationally recognized living-learning community at the University of Michigan.