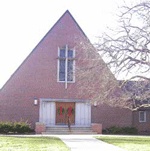 The Reverend Tracy Nichols Huffman has served as pastor of West Side United Methodist Church from 1999 to 2013.

(from the organization's web site)

German immigrant families founded the Erste Deutsche Methodisten Kirche in 1847 and built a church at the corner of East Liberty and South Division. Over the next half century the congregation gradually outgrew this building, so in 1895 they purchased a new site in the heart of the German section of Ann Arbor, now known as the Old West Side. The new church, completed in 1896, was located at the corner of West Jefferson and Fourth Streets.

For many years, the church membership continued to be drawn from the German families of Ann Arbor, but over time, the church began holding both German-language services and English services. Like most German-American institutions, the church came under suspicion of disloyalty during and just after World War I. In 1919, the church was forced to close for a few months. Upon reopening, the congregation gave up German language services and changed its name to West Side Methodist Episcopal Church.

Today, West Side United Methodist Church is a family friendly, multi-generational church, open to all who wish to learn about and share the life and love of Jesus Christ, and make a difference in our community and the world.