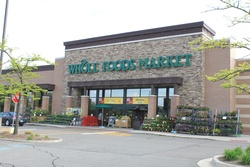 Formerly located on Stadium where Trader Joe's is now.

The current Whole Foods location on Washtenaw, which shares an upscale strip mall with Barnes & Noble and Walgreens, was plagued by parking problems, though nobody driving in from the suburbs seems to be deterred by that fact, in a classic case of, "Nobody goes there anymore; it's too crowded!" Parking is more abundant since the opening of the new Cranbrook Village Whole Foods. The developer argued the parking requirement down from the zoning by questionably invoking The New Urbanism.

A new location opened during the summer of 2008 in the Cranbrook Village Shopping Center at the corner of Ann Arbor-Saline Road and Eisenhower Parkway. The new store occupies about 52,000 square feet which was previously vacated by Mervyn's.

Whole Foods has been accused, at the corporate level, of union-busting; labor activists in Ann Arbor have disappointedly watched union drives at other Whole Foods locations falter.