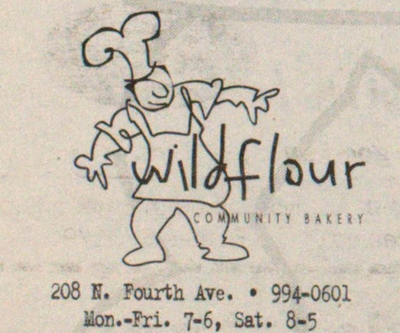 Advertisement for Wildflour Community Bakery, Agenda, March 1996Wildflour Community Bakery was a worker collective, created in the heyday of such pursuits. The rickety wood frame door led into a homey room, where bakers in long skirts, jeans and faded lefty and music t-shirts could be found kneading dough and listening to local punk bands and folk music. It was run by a small staff, but much of the work was done by droves of volunteers There were college kids, anti-vietnam war era activists and natural foods enthusiasts who were there regularly- and schoolchildren, community groups and even groups of people trying to start a new life after prison joined in the baking. They baked exclusively with whole grains- whole grain breads, cookies, muffins and fruit bars were the regular fare. They also experimented with substituting animal ingredients with plant ones- arrowroot powder was a regular ingredient to stand in for eggs, for instance. Wildflour Community Bakery was also involved in the Uprisings group, which published a book called "Uprisings" documenting the philosophy, ideals and baking practices of several worker-cooperative bakeries in the United States in the 1980s.

It seems like just yesterday that I was running soft whole wheat loaves of yeasty bread through the faded green bread slicer at Wildflour Bakery in Ann Arbor. I watched in awe and delight as co-founder Annie, in her long hippie skirt, ate raw cloves of garlic, baking bread at dawn. It was the 80s, and I was a periodic student volunteer, in between political science classes and protests against intervention in Central America. Ann Arbor sure has changed in 25 years!

The original inspiration for Avalon came in part from Wildflour Bakery- a co-op bakery in Ann Arbor. When they closed in 1997, just months before Avalon opened, we inherited their bread slicer, some indestructible muffin pans and their date bar recipe. Thanks, Annie and Paul. For all that you do.