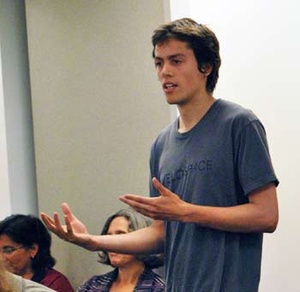 Will Leaf spoke at the July 31, 2013 public forum on the A2D2 zoning review. Photo courtesy of The Ann Arbor Chronicle.
Will Leaf is a business owner and 2012 graduate of the University of Michigan (economics and Russian language).