Willow Run Airport (801 Willow Run Airport, Ypsilanti, MI 48198; (734) 485-6666; [email protected]; web) is an airport on the east side of Ypsilanti originally built to support production of the B-24 bomber during World War Two. It now serves cargo, corporate, and general aviation clients. The airport is managed by the Wayne County Airport Authority, which also manages Detroit Metro Airport. 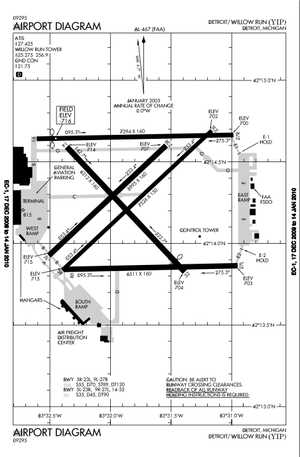 KYIP. Not for use in navigation.

Willow Run is envisioned as a key part of a new Aerotropolis project, connecting it with Detroit Metro Airport to develop a new city based around air travel.