Ypsilanti's City Hall is located at One South Huron, on the corner of Michigan Avenue and Huron Street, in downtown Ypsi. 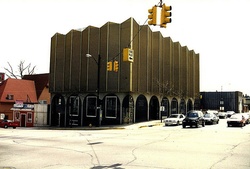 Ypsilanti City Hall in its "cheesegrater" era, shown in this 1993 photo.

The current city hall had a facade known as the "cheesegrater". 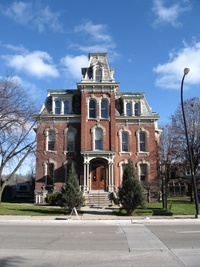 Ypsilanti's first City Hall is at 6 West Cross Street, a blocky building on the edge of the Huron River. Internationally renowned sculptor John Pappas uses this building for his studio.

In 1912, City Hall moved to the Quirk House, at 304 N. Huron Street, built for Daniel Quirk, founder of the Peninsular Paper Company in the 1860s, and donated to the City by his son. More information on this building can be found at: http://www.ypsilanti.org/downtown2.htm

The current City Hall building was constructed in 1877 by the Ypsilanti Savings Bank. The building was renovated in the mid-20th century, in what many consider to be an act of architectural vandalism - the peaked and turreted roof was torn off, and a metal facade attached, which has become unfondly known as "the cheese grater". In 1976, the Bank moved to the newly constructed 301 W. Michigan Avenue, now the Key Bank Building, and the City purchased 1 S. Huron. In 1999, the cheese grater was removed and $1.5M in facade renovations were done as part of a program of downtown architectural rehabilitation.