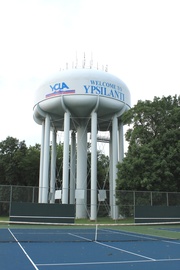 YCUA is the local water utility, providing water to Ypsilanti City and Township and southern Superior Township. The acronym is often pronounced "yucca" (like the cactus), as "ycua" is hard to say.

YCUA used to process water locally; the area around a former treatment plant on the south side of town was turned into Waterworks Park when YCUA began purchasing water from the Detroit Water and Sewerage Department (DWSD) instead.

YCUA's office hours end at 4:25pm, and they stop answering the phone on the dot. If you need to talk to them, watch the time.

Eldon P. Ahles became the first director of the YCUA in 1974.