The Perfect Underwear for Progressive People: For over 50 years in the late 1800s and the early 1900s the Ypsilanti Underwear Company was located along the banks of the Huron River near Forest Avenue.

The Hay & Todd Manufacturing Company was founded by William Hay and located in Ypsilanti, Michigan. Its name was changed to the Ypsilanti Underwear Company in 1904. 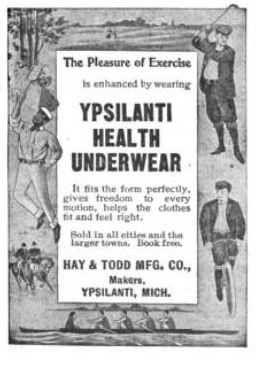