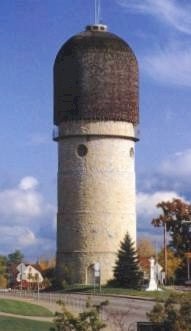 Most. Phallic. Building. Ever.

The stone tower is located at the highest point of elevation of the city on Summit Street. According the Ypsilanti Community Utilities Authority it was "...completed on February 3, 1890, and has been in continuous service since that time." It is only open to the public one day a year during the Ypsilanti Heritage Festival. For Christmas it is decorated with lights.

Long known locally for its suggestive shape, a recent article in Cabinet Magazine deemed it to be the World's Most Phallic Building. Many simply call it the "Ypsi Dick" or the "brick dick."

The text of the historical marker at the base of the tower, as given on MichMarkers.com:

Day laborers constructed this water tower which was completed in 1890 at a cost of $21,435.63. The tower and the city waterworks supplied 471 customers the first year. An ordinance passed on April 14, 1898, established a yearly rate schedule. Rates were based on the number of faucets in use, the type of business that customers operated and the livestock they owned. A residence with one tap was charged $5.00; a private bathtub cost an additional $2.00. Saloon keepers paid $7.00 for one faucet, $3.00 for each additional faucet and $1.00 for each billiard table. Each cow a person owned cost $1.00. People who failed to pay their bill were subject to a $50.00 and ninety days in the county jail. Until 1956 this structure was the only water tower in the Ypsilanti water system.

The Ypsilanti Water Tower was designed by William R. Coats and constructed as part of an elaborate city waterworks project that began in 1889. Located on the highest point in Ypsilanti, the tower was completed in 1890. It is 147 feet high and has an 85-foot base constructed of Joliet limestone. The substructure walls taper from a thickness of forty inches at the bottom to 24 inches at the top. The reservoir holds a 250,000-gallon steel tank. To protect themselves from injury, the builders made three stone crosses; one is visible over the west door. The Ypsilanti Community Utilities Authority has operated and maintained the structure since 1974. In 1975 this tower was designated by the American Water Works Association as an American Water Landmark. It was restored in 1976.