Zingerman's Roadhouse, located at 2501 Jackson Road, was founded in 2003 by chef Alex Young, who serves as managing partner. It is one of the Zingerman's Community of Businesses. 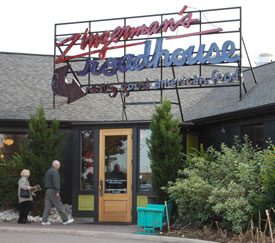 Entrance to Zingerman's Roadhouse, at the southwest corner of Jackson and West Stadium.

The casual, sit-down restaurant specializes in high-quality versions of traditional American cuisine as well as innovative American dishes. It focuses on American ingredients, many of which are artisan products, and some of which are locally made or grown. It is located in an extensively-remodeled former Bill Knapp's in Westgate Shopping Center, at the southwest corner of Maple and Jackson Roads.

The Roadhouse is best known for its impressive array of barbecued meats, which are smoked and barbecued on site, but the menu is far more extensive than that might suggest. Its most controversial specialties are its hamburgers and a dizzying array of variants on macaroni and cheese; made from top-flight ingredients, they have been criticized by some because of their cost. Many, however, think they're worth the price, and the restaurant is generally packed at peak times.

Like Zingerman's Deli, the Roadhouse focuses on providing a high-quality product and knowledgeable staff, rather than on economy.

The Roadhouse is open 7 days a week for breakfast, lunch, and dinner, and also serves brunch on Saturdays and Sundays.

2011: Roadhouse Macaroni and Cheese is named the Best Comfort Food in America by Alton Brown’s Food Network show "Best Of."

2011: Alex Young is named to the Diplomatic Culinary Partnership, a joint venture between the State Department and theJames Beard Foundation.

2009: Is named one of the “Top 10 New Barbecue Restaurants” by Bon Appetit magazine.