Catherine McClary is the Washtenaw County treasurer, a full-time elected position. Her current four-year term runs through 2016. A Democrat and former county commissioner for 14 years, McClary has held the treasurer's office since Jan. 1, 1997. 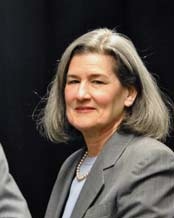 Catherine McClary at an October 2012 candidate forum. (Photo from The Ann Arbor Chronicle.)

The county treasurer is authorized by the Michigan Constitution and state law to serve as the county's banker and investment officer. The treasurer's primary responsibilities are to safeguard public funds and to collect and account for the revenue used to operate programs for county residents.

By virtue of her role as treasurer, McClary also serves on the county's election commission. She has served on a variety of volunteer boards and commissioners, including the task force on sustainable housing; the Adoptive and Foster Parents Support Group; the Government Finance Officers Association (former member of its executive board); the Michigan Government Finance Officer Association (former board member); and the Michigan Association of County Treasurers (former board member).

McClary was elected as Washtenaw County commissioner in 1974, serving one of the districts in Ann Arbor. She was in her early 20s at the time, and served in that part-time role through 1988.

Prior to her election as Washtenaw County treasurer, McClary worked in the private sector as a stockbroker and investment advisor.

McClary is married to Mike Merrick. The couple, who live in Ann Arbor, have two children and 4 grandchildren.

Nov. 4, 2008: Wins re-election for a fourth four-year term as Washtenaw County treasurer. She runs unopposed in the general election, and had also been unopposed in the Aug. 5, 2008 Democratic primary. 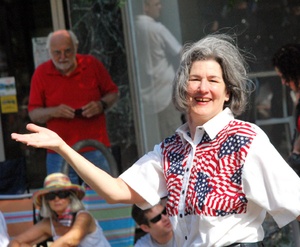 Nov. 6, 1984: Is unopposed and wins re-election to another two-year term on the Washtenaw County board of commissioners, representing District 9 in Ann Arbor. Gets 6,731 votes. She had also run unopposed in the August Democratic primary.

Aug. 10, 1982: Defeats Gerald Faye in the Democratic primary for District 9 on the Washtenaw County board of commissioners, representing Ann Arbor. McClary gets 1,031 votes compared to 395 votes for Faye. (The county board had been reconfigured into new districts following the 1980 census.)

Nov. 4, 1980: Wins election for a two-year term on the Washtenaw County board of commissioners for District 15 in Ann Arbor, with 4,004 votes. She is unopposed in the general election and had also run unopposed in the August Democratic primary.

Feb. 5, 1975: At a county board meeting, county clerk Robert Harrison – acting as the board's parliamentarian – refuses to recognize McClary in the roll call, charging that she "violated her oath of office" by participating in a local lottery that had a pound of "Colombian Gold" marijuana as its grand prize. Board chair Meri Lou Murray removes Harrison as parliamentarian and replaces him with Robert Guenzel, who served as the county's corporation counsel at the time.

November 1974: Wins election to her first two-year term on the Washtenaw County board of commissioners representing District 15 in Ann Arbor. She was 22 years old at the time.

DATE? Earns undergraduate degree from the University of Michigan.