A website about Bald Head Island that anyone can edit 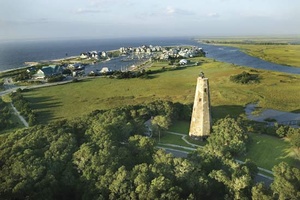 Bald Head IslandBald Head Island is a small island and popular summer vacation destination that borders the Cape Fear River to the west and the Atlantic Ocean to the north and to the south. To reach the island, visitors must board a ferry at Deep Point Marina, located in Southport, N.C. The ferry ride lasts approximately 20 minutes and leaves the mainland on the hour and the island on the half hour, beginning every day at 7:00 a.m. However, the ferry schedule is subject to abbreviation or expansion depending on the season.

Once visitors arrive on the island, they may make a tram reservation or reserve a golf cart in order to reach their initial desired destination. Visitors typically drive a golf cart or ride a bike when getting from place to place rather than by vehicle. Although there are a few maintenance and police vehicles on the island, visitors and local residents are not allowed to have vehicles on the island. This contributes to the more intimate and relaxing environment that typifies Bald Head Island.

Bald Head Island's first lighthouse was built in 1795 but was dismantled in 1813 due to the threat of erosion. Builder Daniel S. Way constructed a new lighthouse in 1817 that was intended to illuminate the mouth of the Cape Fear River. This lighthouse was named "Old Baldy" and still exists on the island today, making it the oldest standing lighthouse in North Carolina.

Aside from the historical aspects, the island is known for its 14 miles of beaches and additional restaurant and shopping amenities, which are listed below. There are multiple waterfront restaurants that appeal to visitors, as well as the Island Retreat Spa and Salon, located near the Maritime Market. During the summer, visitors can enjoy a wide range of aquatic activities, such as swimming, boogie boarding and stand-up paddle boarding. Additionally, the island is home to many beautiful plants and animals that appeal to those that love nature.