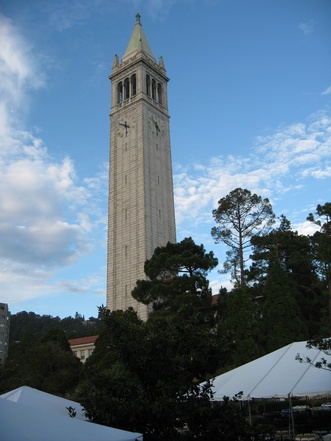 Sather Tower, commonly known as the Campanile, is the bell tower of University of California, Berkeley and is in the logo of the University. It has a Carillon. In 1949, the Daily Californian published an article titled "Despondent?—Campanile Ideal For Suicide." and it was 9 years later when the first person commited suicide from the tower.

It was completed in 1914 with a $200,000 gift from Jane K. Sather as a memorial to the donor. It was designed by John Galen Howard inspired by the Venetian campanile of San Marco.

John Galen Howard and the Berkeley campus : beaux-arts architecture in the "Athens of the West" / Loren W. Partridge