We recently ended our first big fundraising drive for the LocalWiki project and wanted to take a moment to step back and reflect.

In particular, we'd like to talk about the funding platform we used, Kickstarter, and its advantages and disadvantages. While we already had a grant from the Knight Foundation to develop the LocalWiki software, we need to raise more money to go beyond just the software and help us do community outreach, coordination and education to ensure our project's success.

Kickstarter describes itself as "a new way to fund creative ideas and ambitious endeavors." It works like this:

An almost remarkable percentage of Kickstarter projects reach their funding goal. How's this possible? There are a few reasons why Kickstarter appears to be such a successful fundraising platform.

In our case, Kickstarter staff were concerned with our initial reward selections. Kickstarter wants you to have a rich selection of rewards that provide a lot of value to pledgers. For instance, something that seems like it ought to be worth $50 should be priced as close to market value as possible in the reward selection. We almost gave up on using Kickstarter because the approval process appeared to be pushing us toward a reward selection that would really cut into our real, post-reward funds.

So, in our case, we ended up paying Kickstarter $1,316. That's fairly significant, but it may be worth it.

Launching a Kickstarter project means you're going to have to do certain things if you want to meet your funding goal:

Your project will also be sitting alongside lots of other interesting projects, so just "hanging out" on Kickstarter may help your fundraising effort seem more legitimate. However, you may not get many pledges from traffic originating from Kickstarter.com -- this really depends on what type of project you have. In our case, probably 90 percent of our pledges came directly from folks browsing Davis Wiki.

Having to fit into this mold means you're going to have to do the kinds of things that organizations that fundraise successfully do. Which is great, because you might not have done all these things otherwise.

When we decided to launch our outreach/education fundraiser we didn't have a lot of time to prepare a fancy fundraising site. We knew the Knight Foundation grant announcement would generate a fair amount of press and we wanted to capitalize on that excitement and energy. We had a couple days before we had to be in Boston for the announcement and most of our time was spent making our fundraising video. So having a pre-built, well designed fundraising site like Kickstarter really helped us.

Here's what you see when you click the usual Paypal "Donate" button on our site: 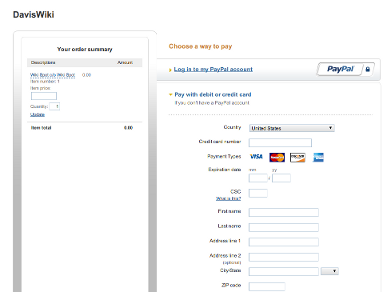 and here's what you see when you click "Pledge" on Kickstarter: 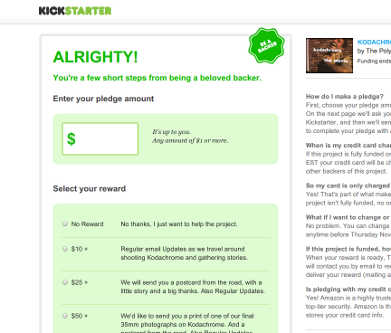 While we could have crafted our own pledge drive interface on top of a payment gateway, using Kickstarter saved us a lot of time.

Kickstarter pledge drives are "all or nothing," meaning that if the goal isn't met by the specified time then no one's credit cards are charged and the project doesn't get any of the pledged funds.

Surprisingly, the all-or-nothing nature of Kickstarter is its greatest asset in ensuring projects hit their funding goal. Once a project has reached a certain threshold of funding, the project creators (and pledgers!) feel an intense desire to "unlock" the money. In fact, word has it that something around 90 percent of projects that reach 25 percent of their funding goal are eventually fully funded.

Having projects be all-or-nothing was probably a decision made by Kickstarter to support projects that need to meet a concrete goal, such as printing the first major run of a new book. These are, by and large, the sort of projects Kickstarter excels at funding -- projects where, if a certain amount of money isn't raised, the project simply isn't possible, or isn't worth it.

But what about projects that deviate from this format? Projects that need to fundraise money but aren't goal-or-doesn't-matter? For more general fundraising projects, the all-or-nothing property has an interesting effect: It functions as a sort of "matching donation" multiplier. In traditional fundraising, matching donations -- where an individual or organization pledges to donation $X but only if $X is raised independently -- are a common and successful way to drum up contributions. With Kickstarter, a donation of $50 with a $10K goal can be thought of as being "matched" by 199 other $50 contributions!

The all-or-nothing characteristic is a way to create a big "matching donation" pool and helps drive pledges even for projects that could make do with less than their goal amount.

It's not all milk and honey, though. There are some hidden drawbacks and costs to using Kickstarter.

Kickstarter takes a 5 percent cut of your pledges and Amazon will take an additional amount (around 2 percent) on top of that. If your margins are slim, this could be significant.

#1 is worth it if you don't have a lot of time or resources to build something yourself. We certainly didn't.

In some cases, #2 is really valuable. Obscure, quirky projects can get amazing press just by being a part of Kickstarter. But if you're doing something more like a traditional community-based fundraiser you probably won't get much from #2. For us, the publicity of being on Kickstarter didn't drive a lot of pledges, but it did give us some valuable exposure.

I think everyone can benefit from #3 unless you're a large organization with a track record of successful fundraisers. In that case you've already got methodology, fundraising materials, and probably a big existing donor base.

We held a couple of offline events during our pledge drive (a bar night and a silent auction). Unfortunately, it's pretty difficult to move offline funds back onto Kickstarter. You're not permitted to "pledge" toward your own project, which means you need to find a trustworthy third party to agree to pledge any offline funds. This also means the offline donors won't be noted on Kickstarter.

For local community-based fundraising efforts this can be problematic.

The all-or-nothing system is a bit confusing

Unfortunately, the all-or-nothing pledge system can be a bit confusing. Many folks we talked to thought they had already given us money before we hit our funding deadline.

Our fundraising period was 90 days -- the longest allowed by Kickstarter -- and so there were lots of people who'd simply forgotten they'd pledged by the time their cards were charged. Thankfully, Kickstarter is astonishingly good at collecting funds (they pester pledgers with an email every day for a week if their card is declined), and we only saw a few pledges that never came through.

Well, all Kickstarter projects have rewards. And unless you get remarkably lucky, you're going to have some cost associated with acquiring, shipping, and dealing with that reward. For folks in the non-profit world, we're all very familiar with the standard tax-deductability formula that's on donation receipts:

This isn't just some tax mumbo-jumbo -- it tells that the donor intended to give at least the deductible amount to the organization or project itself. But this formula doesn't tell us everything. After all, oftentimes we get goods or services donated to us and then, in turn, give them away. We're still bringing in money, either way. So the important missing part here is the cost to us of those goods or services, right?

How do projects measure up?

Methodology: I calculated Profit and Donation amount by using my best guess of production cost and resell value of the rewards (to an interested party). For instance, a T-shirt is counted as having little or no value (unless the project is all about T-shirts). This is roughly how the IRS counts things.

I also subtracted estimated Kickstarter and Amazon fees from total profit. I also factored in over-pledging and "no reward" choices.

The following are projects I've heard about recently, either because they got widespread press or because they touched my social circle in some way:


This is hardly a proper random sample, and all of these projects were successfully funded. Many projects on Kickstarter never reach their funding goal. Unfortunately, it's difficult to search Kickstarter for unsuccessful projects for more data points.

Additionally, there are other costs associated with shipping rewards and time spent drumming up pledges, processing shipments, etc. Theses costs weren't included, but some costs (like time) are very real.

So, is Kickstarter good for running fundraising drives? Well, let's take a look at this graph: 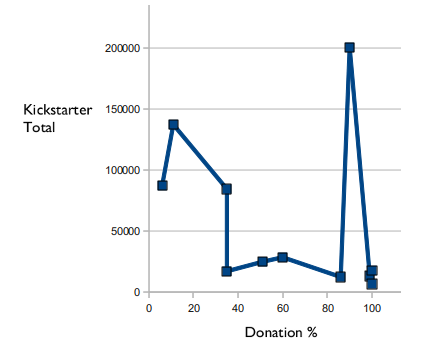 That big spike is the Diaspora project, which had a few extraordinary factors working in its favor -- perfect timing, massive public backlash against Facebook, and a huge NYT piece. Ignoring that spike, it's clear that the projects which have the highest Kickstarter totals are those that are actually getting the least amount in donation-like pledges.

So while Kickstarter has many high-profile, successful pledge drives under their belt, the campaigns that raise the most cash tend to not look much like traditional donation drives.

All-in-all, we're happy we used Kickstarter. It helped us raise significantly more than we would have otherwise. It has drawbacks, though, particularly for non-profit organizations wanting to run somewhat traditional fundraising drives.