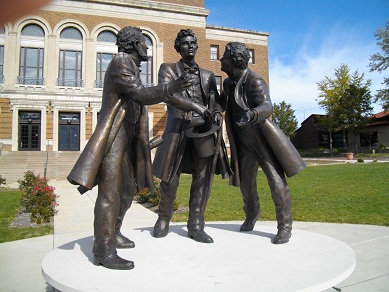 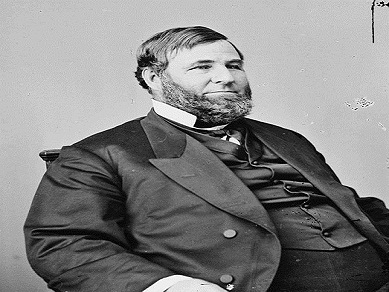 David Davis was one of Bloomington's best U.S. Senator's from Illinois, and he was one of Abraham Lincoln's campaign managers and his closest friend. The David Davis Mansion was where he resided at, located near the Beer Nuts factory, on 1000 Monroe Drive. He was born on March 9, 1815, to a wealthy family in Cecil County, Maryland, 49 miles northeast of Baltimore, where he attended public school. This site will show you all the info about him, from the history of his childhood to the times of his legacy. Also, this wiki will show you history of his education, history when he practiced law, and history of his life with his family. And don't forget to check out the David Davis Mansion, located near the Beer Nuts factory, and the statue of Davis, Abraham Lincoln, and Jesse Fell near the entrance to the Bloomington Center for the Performing Arts in beautiful Bloomington, Illinois. The statue was unveiled on October 23, 2010, during the reception of Bloomington's newly named Lincoln Park.

He became ill with a carbuncle and was confined to his home with what was diagnosed as diabetes in early 1886. He went into a coma on June 20, 1886, and died six days later on June 26, 1886. He was buried along with his wife, Sarah, in the family plot at Evergreen Memorial Cemetery in Bloomington, 1/2 mile east of the Lincoln Leisure Center and Gene's Ice Cream. 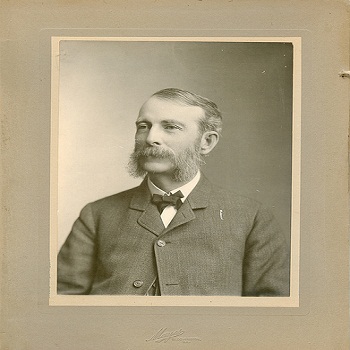 George Perrin Davis was the son of David Davis, who was born on June 3, 1842 in Bloomington, Illinois. He was a director of the First National Bank of Bloomington, and was interested in several other bank institutions. Then he became vice-president of the board of trustees of Illinois Wesleyan University, one of Bloomington's universities. And for a time he was president of the McLean County Historical Society. He was married to Miss Ella Hanna, from Indianapolis, Indiana, a granddaughter of General Robert Hanna at Attica, Indiana, 79 miles northwest of Indianapolis, Indiana, and 66 miles east of Champaign, Illinois, on June 17, 1869. General Robert Hanna was the first man to serve as a U.S. senator from Indiana. He died on January 10, 1917, and his burial site can be found at the Evergreen Memorial Cemetery in Bloomington, Illinois. 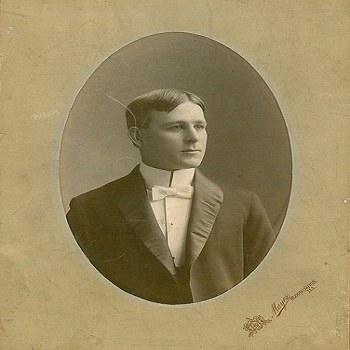 Mercer Davis, born in Bloomington, Illinois on May 6, 1878, was the son of George Perrin Davis and Ella Hanna Davis, and grandson of Judge David Davis. He received his education at Illinois Wesleyan University in Bloomington, Illinois, and Hotchkiss School in Lakeville, Connecticut, 67 miles northwest of New Haven, Connecticut. He returned to Bloomington after completing his education, then he engaged in farming and stock raising, and in the management of the extensive Davis estate here in McLean County. He was married to Miss Dorothy Phelps, a native of Fairbury, Illinois, 37 miles northeast of Bloomington-Normal, and daughter of Albert and Linda (Hanna) Phelps, both natives of Fairbury, at Fairbury, Illinois on April 22, 1903. He died on December 5, 1957, and his burial site can be found at the Park Hill Cemetery and Mausoleum in Bloomington, Illinois, right next to Miller Park, and the Miller Park Pavilion. 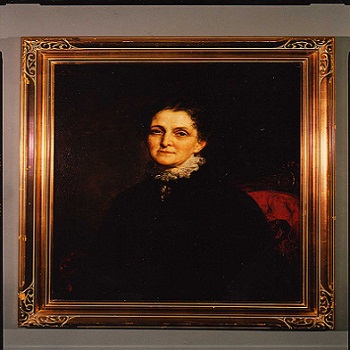 In 1836, David Davis lost his bid to marry Sarah Walker, the daughter of a Massachusetts probate judge, William P. Walker. Sarah Walker Davis, born Sarah Woodruff Walker, was born in Lenox, Massachusetts, 130 miles west of Boston, on September 4, 1814. She was educated at Catherine Beecher's Female Seminary in Hartford, Connecticut, 39 miles northeast of New Haven, where she acquired the skills that are necessary to run a large household. She soon got married to Supreme Court Judge David Davis, one of Illinois' U.S. Senators. She died on November 9, 1879, and her burial site can be found at the Evergreen Memorial Cemetery in Bloomington, Illinois.

He attended public school when he was with a wealthy family in Cecil County, Maryland, during his childhood. Then he attended college and graduated from Kenyon College at Gambier, Ohio, 55 miles northeast of Columbus, in 1832. Then he went on to Massachusetts, and enrolled at Yale University, in New Haven, Connecticut, to study law. He graduated from Yale in 1835, and moved back to here, in Bloomington, Illinois, to begin practicing law.

In 1844, he won election as a Whig to the Illinois legislature. He served as a member of the Illinois House of Representatives in 1845, and as a delegate to the Illinois constitutional convention in McLean County in 1847. In 1848, he presided over the court of the Illinois Eighth Circuit as a judge, the same circuit where Lincoln was practicing. In 1860, he was a delegate to the Republican National Convention, where he served as Lincoln's campaign manager during the U.S. Presidential election. He only served a single term as a U.S. Senator from Illinois. He retired to his home in Bloomington at the end of his term in 1883. 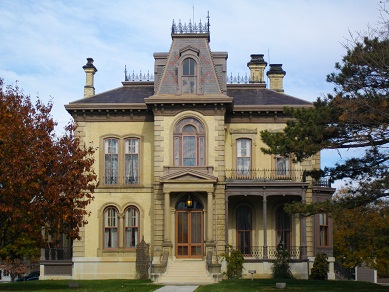 The David Davis Mansion, named after the Supreme Court Justice himself, David Davis, located near both Bloomington Junior High School and Bloomington High School, at 1000 Monroe Drive in Bloomington, Illinois. The David Davis Mansion is also known by another name called "Clover Lawn". The Victorian-styled mansion was designed by Alfred Piquenard, a French-born architect and one of the Midwest's leading architects, who was commissioned by Judge Davis to design the mansion as a residence home for his wife, Sarah Davis, who wanted her to remain here in Bloomington than moving back to Washington, D.C. The mansion was originally estimated to cost about $30,000, but the reported cost was about $75,000 - a figure that did not include furnishings or landscaping.

Alfred Piquenard was born on 1826 in France. He was known for some of his architect designs, like the Illinois State Capitol building in Springfield, Illinois, the David Davis Mansion, residence home to David Davis and Sarah Davis in Bloomington, Illinois, the Iowa State Capitol building in Des Moines, Iowa, and the McLean County Court House. He was chosen as supervising architect for the project, which is a post he held until his death on November 19, 1876. His burial site can be found at the Oak Ridge Cemetery in Springfield, Illinois.

History of Alfred Piquenard's Past Life

He fled with the Icarians and sought refuge from political persecution at Nauvoo, Illinois, about 150 miles west of Bloomington. He left the Icarian colony in 1852 to work as an architect in Kansas and Missouri. He joined the Chicago firm of Cochrane and Garnsey after the Civil War, which had recently won first prize in the competition for Springfield's new capitol building.

—— Edit conflict! Your version: —— WHATS WORKING: You know a lot about david davis and anyone trying to learn about him can come here. It's put together strongly and has a lot of information. HOW TO MAKE IT STRONGER: Having a few more pictures would not hurt. Making a table of contents would make this much more accessible. Formatting the information into paragraphs would make it easier to read instead of just reading line upon lines. The order of the heading are kind of confusing and makes you lose what you are reading. Think about changing the HISTORY header because it all seems to be like history WHATS WORKING: Having a few more pictures would not hurt.

HOW TO MAKE IT STRONGER: You know a lot about david davis and anyone trying to learn about him can come here. It's put together strongly and has a lot of information. Formatting the type into paragraphs will make all the reading look more appealing as well.