History of the Shop

The shop was originally known as Gryfalia's Aerie, after the owner's first Dungeons & Dragons character 'Gryfalia.' It has since changed hands (the new owner's name is Jamie) and gone through renovation and renaming to the current Red Raccoon Games. Some new features include rows of library card catalogs to store Magic cards, a geeky new bathroom including an entrance to the Ministry of Magic and a wall of Magic cards, and baked goods from Kelly's Bakery and Cafe (Kelly is Jamie's wife).

Red Raccoon Games sells Magic the Gathering cards and has regular, officially sanctioned tournaments as well as more casual gaming formats. Red Raccoon has an extensive collection of Magic singles, organized in classic library card catalogs for easy access, as well as many other Magic accessories. Other Collectible card games include Yu-Gi-Oh!, Pokemon, and My Little Pony CCG. Scheduled events and tournaments for various games can be found at the store's web-site. 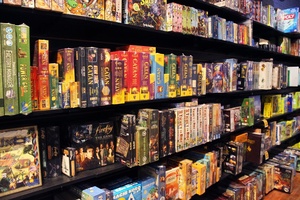 Red Raccoon Games carries a huge variety of popular, classic, and obscurely awesome board and card games, as well as a library of open games, free for anyone to try out in the spacious gaming areas. Board games include classics like Monopoly, Risk, and The Game of Life, along with popular geek-culture games like Arkham Horror, Settlers of Catan, Zombicide, Ticket to Ride and many, MANY, others. Card games include the many Munchkin titles, Illuminati, Poo, Fluxx, and more. The store has regularly scheduled game nights for learning and enjoying new games.

Red Raccoon Games stocks a variety of tabletop role-playing games, from familar names Dungeons & Dragons and Pathfinder to less well known titles like Dresden Files RPG, Through the Breach, and the Savage Worlds RPG. The store regularly holds events for the various role-playing games, giving opportunities for new players to get a taste of role-playing led by experienced players.

Wargames such as Warhammer, Warhammer 40k, Warmachine, Malifaux, and Hero Clix may all be found here. Hero Clix, Warmachine, and Malifaux events are held regularly- check the website for details!.