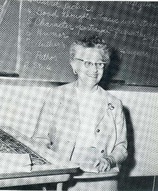 Many people have helped contribute to different aspects of Bloomington-Normal; one of those people was Ruth Stroud. Ruth Stroud was a teacher at University High School and during her time there she helped many students. Her impact at U-High has made a lasting impression and the auditorium named after her is still a thriving center for the arts today.

Ruth Stroud attended Southern Illinois (Normal) University Carbondale where she received a B.S. on June 14, 1926 and a M.S. on June 11, 1930. Right after receiving her M.S. she was hired by Illinois State (Normal) University as an Assistant Professor of English for high school students. Ruth Stroud taught English at U-High for 35 years from 1930 to 1965. When Ruth started teaching University High School students took lessons on Illinois State University campus; it took till 1964 before University High School resided in its current home.

In the early 1900’s two classes from U-High gave a gift of Elgin Marbles to the school, these were plaster copies of the marbles in the Parthenon. When U-High was being moved to its new home the task of taking care of the marbles fell to Ruth Stroud. “Former English faculty member Ruth Stroud was responsible for having the reliefs saved, stored, and hung in the University High School auditorium.” As quoted from The Pioneers Alumni Newsletter from fall 2011. Because of the great care Ruth took of these marbles they were able to be taken down, restored, and hung back up during the renovation of Stroud in 2011.

Ruth Stroud retired in 1965 after having affected many students’ lives as they came and went through University High School. The class of 1965 was very appreciative of Ruth Stroud, the lessons she taught and her attitude in class left a mark on the graduating class. In the 1965 edition of the Clarion (the University High School yearbook) the seniors wrote this touching paragraph in honor of her retirement and dedicated the 1964-65 Clarion to her.

“For all your years of service to the school, and for the few years we have known you, especially in Senior English… For the gift of understanding in Shakespeare, Hawthorne, and Cather… For all the class digressions on Jordan, the sufferings of others, and concern of mankind… For teaching the fun of the English language and literature, even in the classics… For useful quotations, like “Here have we now our country’s honor blesses”… And, most of all, for the priceless gift of words to read, write and enjoy…”

Stroud Auditorium opened in 1966 and was named after Ruth Stroud to pay tribute to the things she had done for University High School. Stroud was to house the play and musical U-High performed every year along with music concerts by the band, chorus, and orchestra. One of the decorations added to Stroud was a pair of Elgin marbles given by two classes from the 1900’s for the future students of U-High.These marbles were looked after closely by Miss Stroud until her retirement and are still present in the auditorium today. 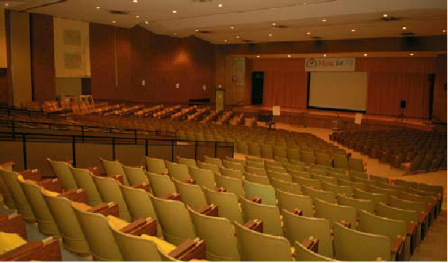 To this day Stroud is used for many events at U-High. Chorus, orchestra, and band concerts occur throughout the year and allow students to exhibit the skills they learn in their music classes. In the past there have been orchesis (dance) performances in Stroud along with school assemblies. Both the fall play and spring musical are performed and rehearsed in Stroud and one of the most entertaining events of the year and a U-High tradition, class night, occurs in Stroud Auditorium.

The Renovation of Stroud

The renovation of Stroud started in the summer of 2009. The renovation was first proposed in 2001 and in 2004 Illinois State University requested Capital Renewal Funding for the renovation but the plans fell through and the renovation was temporarily put on hold by the University. However that didn’t stop University High School; the Seat Campaign was started in 2004 in order to fundraise for Stroud’s renovation. Fundraising was desperately needed since the project required 1.7 million dollars to complete, which was the cost without any upgrades made to the stage. The Seat campaign allowed parents, alumni, and anyone wanting to help, to buy a seat for the new Stroud Auditorium. The seat they bought would have their name on it showing their contributions to the school. Dr. Dean Robert, superintendent, described this in an Alumni Newsletter sent out in 2008.

The renovation of Stroud took longer than expected, lasting from the summer of 2009 to the winter of 2011. During the renovation all the old seats were taken out and the carpet stripped away. A catwalk was put in making spotlights and rigging much safer and easier to deal with. With the money fundraised U-High was able to obtain new sound equipment and improvements to the stage, more than they had hoped they could accomplish.

Now with chairs that don’t squeak and carpet not stained by years of food and drinks Stroud Auditorium is a sight to behold. The Elgin marbles have been restored and placed in the correct order. The rules have become stricter; no food or drink, including water, is allowed in the auditorium and the previous habit of climbing over seats to get the one you wanted is no longer tolerated.

The renovated Stroud Auditorium was opened in the spring of 2011 with the performance of The Phantom of the Opera, U-High’s school musical. While not all the kinks had been worked out (the first performances of the musical were sweltering because of the lack of air conditioning) today Stroud is housing concerts and plays comfortably for everyone and the renovation of Stroud was worth the money and wait 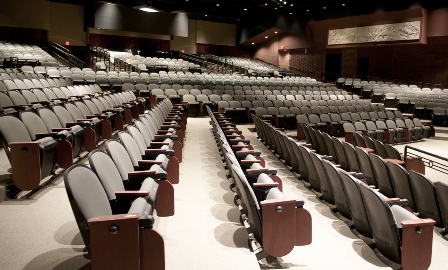 Today when alumni come back to the school the ones that had her as a teacher remember Ruth Stroud fondly and can recall many times when she positively affected their lives. Even the students that came years after Ruth Stroud taught know about her, she is kept alive with stories given at alumni assemblies and stories of her ghost haunting the school. The idea of Ruth Stroud loving U-High so much that she stayed even after she died has prompted many entertaining and meaningful moments. While Ruth Stroud does not actually haunt University High School she is still present, in the auditorium named after her holding the Elgin marbles she took care of, in the alumni that come and share their knowledge of her, and in the stories passed around by the students today.