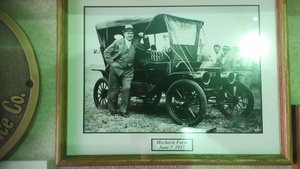 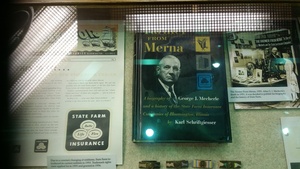 State Farm Insurance Company was founded in 1922 as a mutual insurance company by a local farmer named George Mecherle.  George was a farmer like his parents who immigrated to the United States from Germany in the early 1880s.  Source.   George was born in Merna Illinois on June 7, 1877, and he  died at the age of 73, on March 10, 1951.  George is buried in Bloomington, Illinois, the town that is home to the company he founded.  George married two times.  After his first wife died in 1944, he then married his second wife Sylvia.  Sylvia died in 1965, when she was 80 years old.  Source.  George Mecherle, was a farmer until about the time he was 40 years old, which is when his wife became ill and he had to leave farming.  George started selling insurance with a Bloomington insurance company after he stopped farming.  Running his own farm helped him become a creative thinker.  he was always looking for ways to run his farm better.  These characteristics stayed with him when he became a salesman.  George was an open and honest man.   One day, he told his boss at the insurance company some of his good ideas about improving the business, and the boss told George that he could take his ideas an open his own company if he didn't like the way things were run at the company where he worked.  No surprise, George decided to start his own company.  He took his original idea of providing lower cost insurance for farmers and people who lived outside the city with him to start his own company, and started selling insurance to farmers and rural automobile owners.

George Mecherle's original idea of selling lower cost insurance to people who were lower risks seems like common sense now, but it was new an innovative at the time.  When George first started selling insurance, the rest of the insurance industry did not use this idea of adjusting rates based on the characteristics of the risk, everything was just thrown into one pool. This made insurance for farmers and rural residents overpriced.  George's perspective opened up new ideas in insurance that were not used previously.  This helped him grow his early insurance business.  George  formed a mutual company, that initially concentrated on rural and small town drivers who, usually, had less accidents and were less costly to insure.  He was able to sell many more policies than his competition because people had the same basic idea that they should be charged less than big city rates. 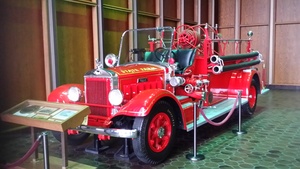 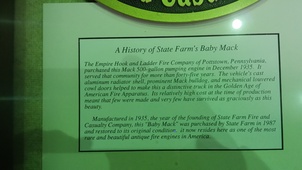 State Farm was also a pioneer and innovator in many insurance concepts and processing their own ideas.  Though the concepts, innovations, and pioneering ideas have changed over time, the spirit of innovation lives on.  From sewing machines used to sew policy records together, to employees with roller skates to speed deliver of internal mail and documents, the lists of innovations goes on. 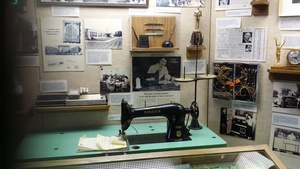 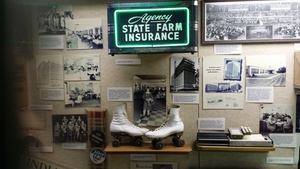 Mecherle used his relationships with other farmers and farm bureaus to expand his new insurance company.  Some of the people he pitched his ideas to became agents and sold insurance for George Mecherele.  Since many of the people who became agents were already part of local farm bureaus, it provided Mecherele with inroads to groups of farmers who had need of lower insurance and were the exact market that Mecherle was looking to sell insurance to.  This also made advertising easy because everyone involved was already familiar automobile insurance for farmers and rural residents, but only Mecherle provided the lower priced insurance that made sense. . Source: Many of the first agent only worked part-time and had other full-time jobs.  The commission was usually less thatn what otehr companies were paying their full-time agents.  However, at the time, there was really no need for full-time agents for the fewer farmers and rural residents.  The lower commissions help keep costs down and agent could make some of the money difference by selling more policies with the lower priced insurance. Times and marketing have changed, but innovative and sound  marketing continues to keep the company growing strong.   State Farm is the number one property and casualty insurer in the United States, and has won numerous awards. 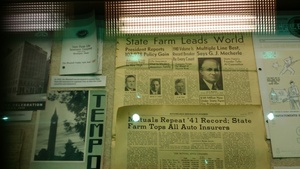 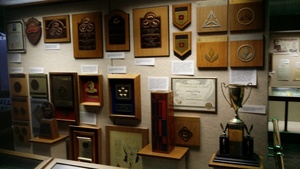 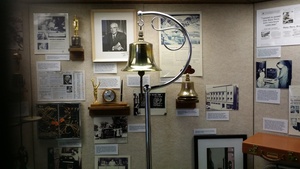 After World War II, the insurance industry in the United States also needed to be rebuilt.  One problem was there were not many people qualified to work in the insurance industry, and insurance companies needed more employees for the growing United States economy.  In America, it was a time when people were discovering the freedom of owning and driving automobiles, and the growing economy made this possible.  This increased claims, but also added to the shortage of workers.  George Mecherle demonstrated his strong leadership style during this difficult time. George knew he had to stay true to his founding principles of honest and integrity.  Through the rebuilding after the war, George led the company by sticking to his principles, which helped maintain and build the solid reputation of the company.   Though leadership personnel have changed over the years, the spirit and principles of George Mecherle remain. 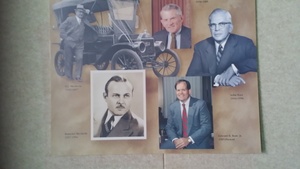 In the lat 1960s, the company began embracing the young computer age that was just beginning.  Computers help lower costs by performing some work more quickly and efficiently than could be handled manually.  This investment, and the attention State Farm was paying to its customers helped it survive and thrive when other companies were having major difficulties at that time.  State Farm continues to adapt to the technology and customer needs of the time,  State Farm Insurance always seeks to be a "good neighbor".  This "good neighbor" attitude helps State Farm continue to expand.

In the 1980s, the property and casualty insurance industry faced many growing pains.  There were storms, disasters, and changes in the legal and regulation environments.  Again, through strong leadership that focused on the principles of honesty and integrity, the company was able to come through the storm stronger than before.  Many other insurance companies were not as fortunate, but State Farm continued it commitment to policyholders.

The 1990s brought more storms, natural disasters, public image challenges, and further changes in the legal and regulatory environments.  State Farm's honest and conservative principles helped guide the company to further expansion, through these difficult times.  Today, State Farm is number one property and casualty insurer in America, and is one of the top companies of the Fortune 500.  It has over 79,000 employees and more than 16,000 agents, with over 70 million policies.  State Farm continues it expansion and has announced plans to expand it operation in several urban areas, to continue better serving its policyholders.

In 2013, State Farm donated  $ 1. 5 million gift from State Farm Companies Foundation to heartland Community College and $ 1. 9 million to Illinois State University.  State Farm has a strong commitment to the local community, giving back to the community that it serves.  State Farm's mission is " To help people manage the risks of everyday life, recover from  from the unexpected, and realize their dreams."  State Farm is truly a group of people who make it. their business to be like a "good neighbor".

We are fortunate to have State Farm Insurance Company here in Bloomington-Normal.  The positive local impact is tremendous.  The real estate, restaurants, businesses, entertainment, and all other industries benefit from the company and its employees. The local economy is strong and stable because State Farm is strong and stable.

State Farm also donates nationally, during the week of Veteran's Day, as a way of saying " Thanks for being there" to our nation's service men and women, State Farm made a donation to the Fisher House Foundation for each "thank you" sent via its Thanks for Being There web site. Fisher House Foundation, helps military families. State Farm is also active in collaborating with and supporting the Special Olympics, Red Cross, United Way, and many other charitable organizations.

Again, "Like a good neighbor" is not just a slogan, it is company way of life.