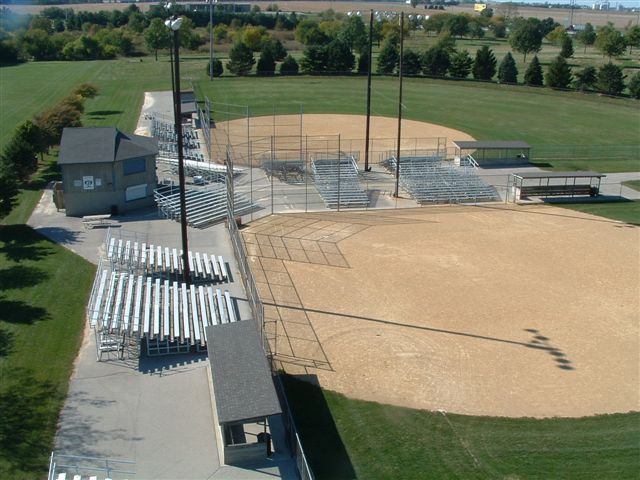 This one hundred and twenty five acre park located on the West side of Normal is co-owned by Unit 5 school district, and the Town of Normal. Maxwell is a crossroad between Parkside Elementary, Parkside Junior High School, and the Normal West High School. This Park also provides the community an opportunity for an abundance of sports and recreational opportunities, while also providing numerous passive areas for those seeking a more relaxed activity. Facilities and equipment that are accessible from the parking lots include the Champion Fields; Open for the public to use, these baseball ball fields are used by Normal Community West and Parkside for their Baseball and Softball teams to practice, along with Normal's Park and Rec softball program. Considered to be one of the best softball complexes in the Midwest, Champion Fields hosted seven ASA National Tournaments since 2000 and was asked to host the 2013 USA/ASA Girls 14A National Championship. Maxwell also has six lighted tennis courts are used by Parkside boys and girls tennis teams. The courts are also frequently used by local UFL teams for practice. A good size playground for all ages, having swings, slides, and  a rock wall. A large picnic shelter is centralized in the park  ready for reservations with restrooms(thank god). Other facilities include an a 12 pit lighted horseshoe court, three small picnic shelters, a hard surfaced basketball court, a very popular dog park, and a large natural area in the rear of the park with hiking trails.