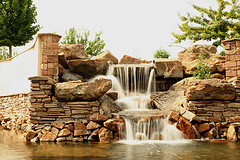 Waterfall photo by DieselDemon, and used under a Creative Commons license. The Idaho Anne Frank Human Rights Memorial is a .81-acre educational park inspired by Anne Frank's faith in humanity.

The Idaho Anne Frank Human Rights Memorial in Boise has been named one of only 11 United States sites to receive a sapling from the actual Anne Frank Chestnut Tree in Amsterdam. To learn more, click here.

The 180-foot Quote Wall takes you on a walk through history. The words of presidents and slaves, children and philosophers, poets and paupers, the famous and the unknown are inscribed side by side.

On December 10, 1948, the United Nations adopted and proclaimed the inalienable rights and fundamental freedoms of all people. Eleanor Roosevelt was chair of the U.N. Commission on Human Rights, which wrote this document promoting social progress, freedom and better standards of life.

Frank Church served as an Idaho Senator from 1957 to 1981. He was instrumental in the passage of the first Civil Rights Bill since Reconstruction. His widow, Bethine, continues his legacy and is active in numerous civic activities. A bronze representation of Anne's diary will be added to the desk in the future. 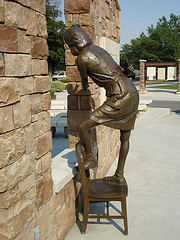 From the amphitheatre there is a view of the life-size bronze statue of Anne Frank. The sculptor, Greg Stone, cast Anne as if she were pulling back an imaginary curtain and gazing out a window from the family's attic hiding place. Funded largely by the students of Idaho, the names of 44 participating schools are on pavers in the area near the Church Writing Table.

Anne and her family, as well as four other Jews, hid for more than two years until they were betrayed, arrested and sent to concentration camps. The markings behind the statue depict rooms in the cramped hiding place. A wooden staircase, much steeper than the stairs at the Memorial, was hidden by a movable bookcase. The quotes on the stone bookcase were taken from Anne's diary.

The Cityscape Wall and Butterfly Poem

The wall closest to the Boise River is reminiscent of Amsterdam where Anne Frank Lived. "The Butterfly" was written by Pavel Friedmann while he was imprisoned in the Terezin Concentration Camp near Prague. Of the 15,000 children who entered Terezin, only 100 survived. Friedmann died in Auschwitz in 1944.

The names of our major donors are on the donor tablets near the Church Writing Table. The pavers were purchased by donors prior to the start of construction. Pavers can still be purchased and placed at the Memorial. We urge you to read the thoughts of our donors on the benches, seats and pavers.

The Idaho Human Rights Education Center is the builder of the Memorial, which was the Center's gift to the City of Boise on August 16, 2002. A nonprofit educational organization, the mission is to promote respect for human dignity and foster individual responsibility for justice and peace through education.