While Treasure Valley residents now frequent Bar Gernika to enjoy an eclectic mix of American fare and traditional Basque cuisine, this was not always the case. Constructed in 1912, this building first was home to the Quong Chong Laundry, one of the many culturally diverse businesses then on Grove Street. Later, this small brick structure was converted into a restaurant, the “Boulevard Lunch,” and then became “The Cub Tavern” in 1948. More than 40 years later, the location took on a definite Basque flavor when the site was saved by the Basque Cultural Center of Idaho, Inc. and the Oppenheimer Development Corporation. The building was renovated in 1990 and leased to Dan Ansotegui, who transformed it into “Bar Gernika” in 1991. The bar received its name from Gernika, Boise’s sister city in Bizkaia, Spain. 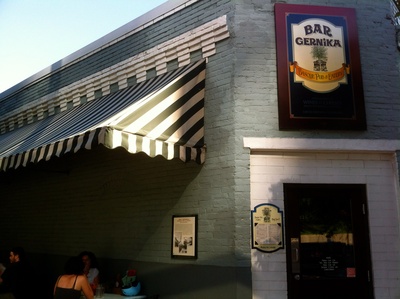 * Photo by P. Browning permission to copy/reproduce for educational purposes only.