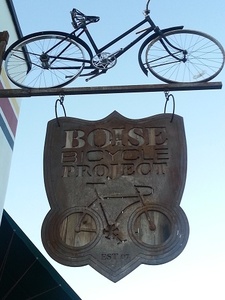 The Boise Bike Project (http://www.boisebicycleproject.org/Welcome.html) is a community oriented effort to promote the personal, social, and environmental benefits of bicycling. It functions as a bicycle recycling center as well as an educational workspace in a diverse, non-threatening atmosphere.

Founded in 2007, Boise Bike Project operates around the belief that Boise has the potential to be one of the cycling capitals of the U.S. and exists to help strive toward reaching that potential. Boise Bike Project is run under the philosophy that “By teaching and making the sustainable benefits of the bicycle available to the entire community, we see Boise becoming a better place to live each and every day.” (Executive Director Jimmy Hallyburton)
Beginning out of a small apartment the founders of the Boise Bike Project purchased 62 bicycles from the Idaho Youth Ranch and began fixing them for children in need. The organization quickly grew out of its small home and was reborn in the old, but newly renovated (by the BBP staff) Boise Rescue Mission building allowing them to greatly increase their potential for donations. Knowing that this could not be a permanent home for the BBP, the staff, with help from volunteers, began moving the entire operation to its new location using only "human-power". On July, 10th 2009, Boise Bike Project opened to the doors to its new and current location and was visited by hundreds of people hosted solely by Co-Founder Jimmy Hallyburton. In the summer of 2011, BBP started the "Biking to Buy the Building Initiative", earning the 115,000 dollars in donation money that was needed to lock down the lease on the building through 4 months of almost solid back to back public events. Today the BBP continues towards permanently purchasing their building through fundraising and actively donates hundreds of bicycles a year to children/people in need both locally and as far as select villages in Africa through BBP's "Village Bike" Project.

Boise Bike Project strives to work with other like-minded organizations to promote healthy, sustainable and positive lifestyles in the Treasure Valley community. BBP is partnered with over two dozen other local and national organizations from the Boise Co-op. and the Boise School District to YMCA, Boys and Girls Club and The Headstart Program. BBP can be found behind many of Boise's biggest cycling related events such as the annual Tour de Fat and the Boise Twilight Criterium race through the Bodo district. 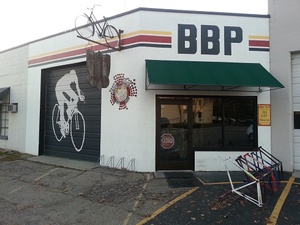 Photo by Aaron ElferingBBP offers a number of programs designed to encourage bicycling amongst the area’s younger population. Children 12 and under can receive a free bicycle after completing the “B.A.S.H.” program (Bicycle Skills and Safety Hour), an hour-long class that teaches kids about safe cycling. Kids ages 13 through 17 can earn a bike instead of buying one by volunteering their time with BBP. It generally takes six to eight hours (plus the one-hour Earn-a-Bike orientation) of work time to complete the requirements for a bike. Upon completion, kids can pick out an as-is bike and, with the knowledge and skills they’ve gained from working at BBP, begin fixing it up for themselves. Additionally, BBP gives hundreds of bikes away to low-income children during their annual Christmas Kids Bike Giveaway.

Some of BBP's more popular monthly programs include:


In addition to service, self-repair and educational programs, Boise Bike Project utilizes some of its bicycle donations by stripping down bikes that have been rendered out of commission, organizing and selling used components for affordable prices to any looking for a more affordable means of replacing damaged parts or assembling new projects.