The Boise Music festival is a musical event held annually at Ann Morrison Park in Boise since 2010. Free admission, along with dozens of local and popular artists has made the newly-formed event extremely popular.

In 2010, the Boise Music Festival- featuring artists such as Bret Michaels, Macy Gray and the Backstreet Boys- drew overwhelmingly enormous crowds. The organizers of the event, Peak Broadcasting gave away 75,000 tickets in advance and 25,000 at the gates, but due to large crowds still forming, began to give anyone admission. In the end, an estimated 70,000 people were jammed into the park, eliciting many changes to the 2011 event.

The following year important changes were made. Organizers moved the event from the end of the park nearest Americana Blvd. to the soccer field area, providing much more space. In addition, there were more vendors, security, and parking accommodations. The 2011 acts featured additional popular artists such as Joan Jett, MC Hammer, and Sugar Ray.

In addition to the musical performances, other events are held such as a barbecue cook-off. The cook-off, which is sanctioned by the Kansas City Barbecue Society (KCBS) required a $250 entry fee, but qualifies the team for a share of the $10,000 grand prize.

The Boise Music Festival is set to have its 3rd annual event, according to a contact with Peak Broadcasting, they will be “moving a few things around this year”, and the date is set for July 7th. 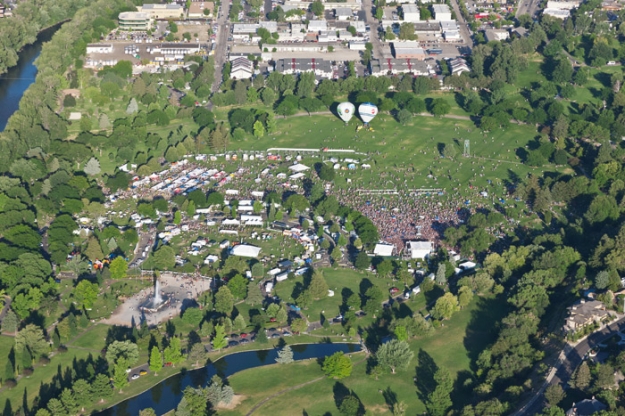 An aerial image of the Boise Music Festival

Permission to use photo was given by Mike Owens at Peak Broadcasting via E-mail.