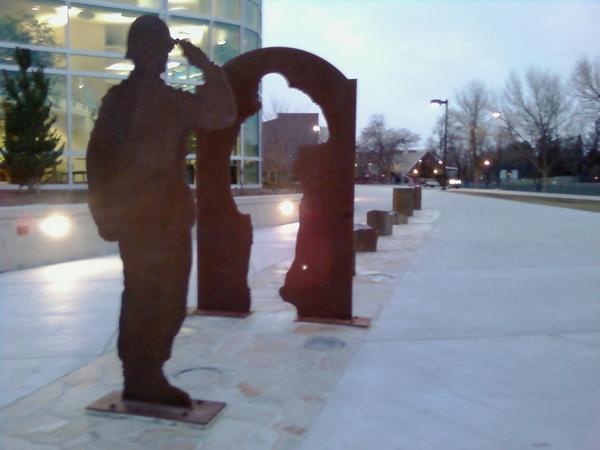 On 11 November 2008, a new sculpture on the north east side of the Student Union Building was dedicated in honor of the veterans that have served and honor the service and sacrifice of those students how have attended and are now attending Boise State University. The sculpture is called “Salute”. It is a three dimensional piece that portrays those who have served in the Armed Forces of the United States. It is a silhouette of a service member saluting, and in the foreground, it shows the metal that it was cut from, combining the image to make it whole. The sculpture is lit from all angles to show the eternal vigilance and commitment that our men and women of the Armed Forces dedicate their time and energy in the defense of our country.

The sculpture was commissioned on in 2007 and the sculptor is Kay Kirkpatrick from Seattle, Washington. Ms. Kirkpatrick has many relatives that live in Idaho and many of them are veterans. According to the BSU news release dated 7 March 2007, it was stated that, “Four thousand proposals were submitted” and hers was selected. The news release also stated that she had to submit a three dimensional scale model and a descriptive narrative that concerned the artists approach, a timely budget and when the sculpture would be delivered.Ms. Kirkpatrick stated in her proposal that, “the salute as a gesture symbolizes both answering to duty and the individual who places working toward the benefits of others above themselves.”