The capacity has increased from 1,000 to an approximate capacity of 34,000.   The permanent sections of the north and south wings of the stadium were officially erected in the 70's.   The sky boxes and upgraded press facilities were added shortly after the 2007 Fiesta Bowl win and an additional stadium expansion is currently being constructed to push the crowd capacity above 45,000.   Alcohol is not permitted inside the stadium facility however there is plenty of booze to be had in the surrounding parking lot with the tailgaters.   The blue turf was installed in 1986 by Athletic Director Gene Bleymaier as a promotional idea to differentiate the school and it's football team.   Complaints accuse Boise of an unfair advantage regarding their color scheme and the color of their field.   These accusations fall apart when you consider all the green colored football teams and their green fields.   Myths (birds don't crash on the blue just theOregon Ducks) such as the Broncos grandfathering their colored field when transferring from D-II to D-I have no factual support since the NCAA official rules do not regulate field color.   Boise State's field is officially named 'Lyle Smith Field' after former Boise Junior College Head Coach/Athletic Director Lyle Smith.    If you have an opportunity to check out the blue turf in person I'd suggest seizing it. 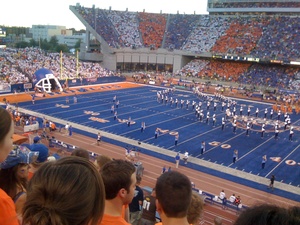 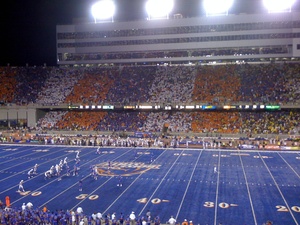 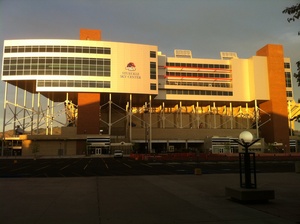 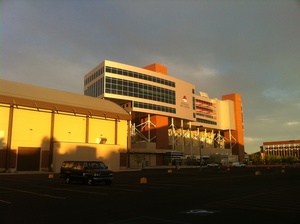 West side of Bronco Stadium* 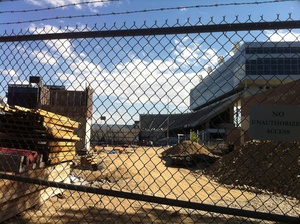 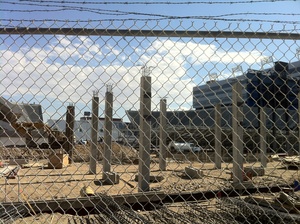 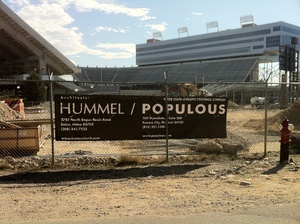 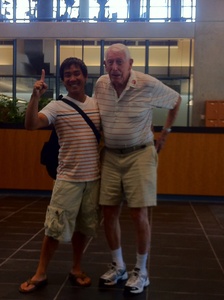 *Photos by Philip Browning permission to copy for educational purposes only.