In recent years, Canada Geese populations in some areas have grown substantially, so much so that many consider them pests (for their droppings, the bacteria in their droppings, noise and confrontational behavior). This problem is partially due to the removal of natural predators and an abundance of safe, man-made bodies of water (such as on golf courses, public parks and beaches, and in planned communities).

In North America, non-migratory Canada Goose populations have been on the rise. The species is frequently found on golf courses, parking lots and urban parks, which would have previously hosted only migratory geese on rare occasions. Owing to its adaptability to human-altered areas, it has become the most common waterfowl species in North America. In many areas, non-migratory Canada Geese are now regarded as pests. They are suspected of being a cause of an increase in high fecal coliforms at beaches. An extended hunting season and the use of noise makers have been used in an attempt to disrupt suspect flocks.

It is this non-migratory variety of Canadian geese which have recently come to call Boise their year-round home. While Boise has long been a favorite pit-stop on their yearly migrations from the unforgiving winters of our Canadian neighbors to the north it has only been in recent memory that they have graced our fair city throughout all four seasons. According to Monte, one of the first geese to establish Boise as his year-round residence, it is Boise's abundant open and grassy spaces which accounts for its popularity among the nation's rapidly growing Canadian Goose population.

What was at first a small and fragile population of geese during the last ten years has ballooned into a healthy and stable population of several thousand. While some residents estimate that our virile goose population will reach a million in the next five years, others believe that it will take ten. Boise's attempts to disrupt the mating patterns of the geese by littering our parks, golf courses, and other open spaces with black coyote "scare geese" has so far proved ineffective at slowing the expansion of the goose population.

1) A predatory bird breeding program, in which goose predators would be released from the World Center for Birds of Prey on a controlled basis. 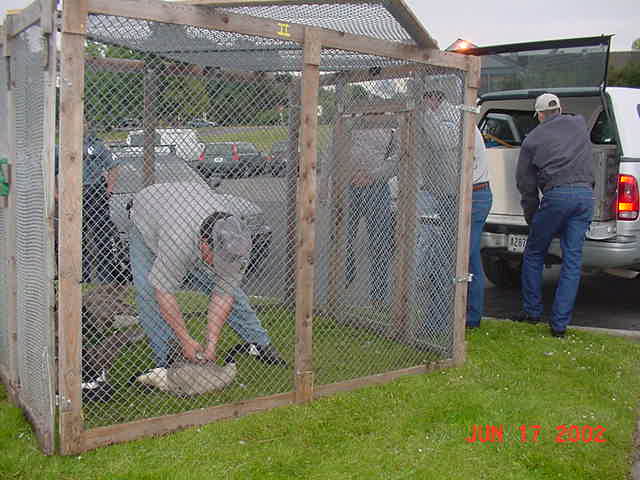 3) An "Adopt-a-Goose" program in which Boise residents could invite a goose or two into their homes to get them off the sidewalks and out of the parks.

4) A Canadian Goose spay and neuter campaign, with Bob Barker as leading spokesman.

5) As goose egg-laying season commences, Boise could host a city-wide Easter weekend egg hunt, the spoils of which would supply the city for its first annual scrambled egg cookoff.

6) With the imminent passing of a bill allowing concealed weapons on Idaho school campuses, geese could be used as targets to train gun-toting students. Since Canadian Geese are noted carriers of bacteria, the legislature could pass an additional bill labeling them as "terrorists," which will make it legally feasible to unleash gunfire on these members of a large Axis of Evil.

7) Require all Canadian Geese to be tagged with identifying information. Those who are caught without proper identification will be deported back to Canada.

8) In order to stop the illegal migration of geese, a (very tall) fence should be constructed along the Canada-U.S. border. Taxpayers should not oppose the building of such a fence once they are given the choice between that and being levied a fine for any goose waste found on their lawns and sidewalks.

9) The green solution to Boise's irascible geese would both conserve our precious water resources and encourage the geese to migrate to other areas (such as Salt lake City, Denver, or California). The plan would be to let all the grass in Boise die out over a three year period. Watering one's lawn, and the city parks and golf courses would be illegal. Since grass is the main food source of Boise's Canadian geese they would soon relocate to more hospitable environments.

10) Since geese spread bacteria another solution would be to list them as biological warfare agents. Once they are listed as bio-terrorists Boise could call upon federal resources such as the Department of Homeland Security, the Army Corps of Engineers, the Department of Defense, and the Department of the Interior, to help us rid our community of these feathery pests.

11) Stop feeding the geese during winter months.   When the geese discover their local source of handouts has been extinguished they will naturally vacate Boise and move onto available sources of food.

12) Many individuals find geese eggs to be tremendously tasty.   Idaho Department of Fish and Game could collect geese eggs and create a giant scramble for locals to enjoy (don't let the Feds know though since Canadian Geese are protected by the Federal Migratory Bird Treaty Act).

13) Tie a piece of string 12 inches high along the greenbelt shoreline.   Geese seem to dislike the string and won't cross.   This works in similar principle as the cattle guard.   Cattle and Canadian geese are not the brightest crayon in the box.

14) Provide Canadian geese with foods that will constipate them.   They will learn the lesson!

15) Retrofit the entire city of Boise with an invention called "awaywithgeese".   Apparently they can't stand amber colored lights in their eyes.   Again, Canadian geese are very unintelligent (but Canadian people are very smart).

16) If all else fails then start pooping in their territory because that will teach them a lesson!