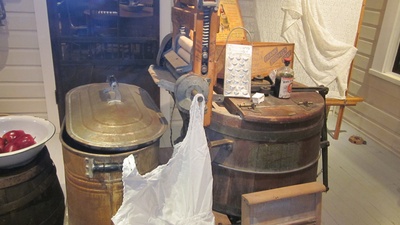 19th and early 20th century washing equipment. Photo was taken at the Idaho State Historical Museum
Laundry was a ridiculously difficult chore in the 19th and early 20th centuries. It was for this reason that a booming business of launderers grew in the heart of Boise's Chinatown. While many were mining the Boise Basin, a multitude of Chinese Boiseans began to make a living in the laundry trade. Laundry was by no means the easy task you and I (begrudgingly in my case) perform these days. Instead, washing clothes was a multistep process that was time consuming and physically taxing. First, water had to be pumped or carried inside and heated. The clothes had to be soaked with harsh soaps in a washtub where you would scrub each garment on a board or stir the tubs full of clothes and suds with a dolly stick. Then the clothes were taken out and placed into another tub with soap and water, and boiled. After the boiling, the clothes were rinsed repeatedly until the soap was removed and each piece of clothing was then cranked through a wringer and pinned up to dry. For those miners who were living in boarding houses, doing their own laundry was impossible, so it made sense pay someone with the facilities to perform the task. For Boise wives raising children and caring for their home and husband, is it any wonder that they would have gladly paid someone else to do the washing?

In the 1870's, Idaho Street became the center of the Chinese laundry trade, which was both a boon and blight to the fledgling city. The Chinese launderers were hard working and efficient, getting the arduous job done in a timely manner so those who were prosperous enough to afford their services could go about their business in clean clothes! But for many citizens of Boise, this was just the silver lining to the problem of the Chinese. All of that water used in the cleaning process had to go somewhere! Usually, the dirty water ran all through the streets... Authorities identified this as a major health hazard and the city passed legislation which required the Chinese residents of Idaho Street to dig drainage trenches along the roadside to divert the water. Some say that this was the beginning of the myth of the Chinese Tunnels. Water problems weren't the only issue facing the Chinese launderers. Boiling huge tubs and ironing massive amounts of clothes, required the constant stoking of fires in each of the laundry facilities. Accidents and the nature of the task at hand meant that destructive fires rolled through the district frequently. To top it all off, ironing the clothes once they had been cleaned required a certain amount of water be spritzed on the clothing to avoid burning, but atomizers were expensive. Many Chinese (and homemakers as well) would just spray water out of their mouths onto the fabric instead. Many white customers believed this to be a disgusting sign of disrespect, even though it was a practical solution to a problem associated with the job.

The populace decided that the "Celestials" were careless, unhygienic, and reckless, and there was a push to open 'white' laundry facilities which would take the Chinese element and hence, the risk out of the process. Needless to say, this didn't work and the Chinese laundry services thrived in Boise until the mechanized washing machine was made available to the city's residents. As a last ditch effort to curtail the Chinese laundry industry's success (and many say a thinly veiled attempt to drive the Chinese out of Boise altogether), city ordinance required high fire risk sections of town be rebuilt in brick. The parts of Boise's Chinatown housing the laundry facilities was ultimately deemed a fire hazard. This was an extremely expensive move for the establishments. The vast majority of the Chinese district was of wood construction, and the new brick requirement was a motivation for many Chinese to abandon the Idaho Street district altogether and set up shop in a new section of the city. This led to the overall relocation of Boise's Chinatown to the area surrounding Capitol Blvd and 8th street. Some of the brick laundry establishments survived the urban renewal movement during the 1970's and 90's. Most notably, the building now housing Bar Gernika was the home of a Chinese laundry before the area became part of the Basque Quarter.

Know anything about the Chinese Launderers that we left out? Tell the world about it by adding a little something to the article above!

Or, do you have any memories, stories, or pictures you would like to share about this piece of Boise's past? Don't be shy, edit away!