The history of cross that stands on top of Table Rock has had a volatile 60 plus year history.

On June 10, 1970, the Jaycees submitted a requested the Board of Correction for the purchase a 44-foot-by-70-foot parcel of land that would surround the land around the cross.

On June 25, 1971, the Correction Board deemed the desired land surplus and turned it over to the Idaho Department of Lands. Idaho Board of Land Commissioners records reveal that because the requested land was on the very edge of Table Rock’s ledge, the Board of Correction did not feel it would negatively impact the surrounding state owned land.

The land was sold to the Jaycees for $100.00. From then on the cross has been considered to be on private property.

On December 16, 1994, the American Civil Liberties Union (ACLU) penned a letter to the Land Board asserting the sale of the parcel of land was both unconstitutional and a violation of state law. The letter stated the Land Board had taken the liberty of refusing bids other than the Jaycee’s. It also accused the Land Board of restricting media coverage, which they claimed had left the general public in the dark. In March of 1995 Land Board members voted and rejected the ACLU’s request to void the sale.

Controversy escalated in November of 1999 when (self-described) atheist human rights activist Rob Sherman gave a speech at BSU claiming the Jaycees were a “bunch of criminals” and threatened action to bring the cross down. The dispute resulted in over 10,000 people participating in a march from the Boise Depot to the Statehouse to save the Table Rock cross. 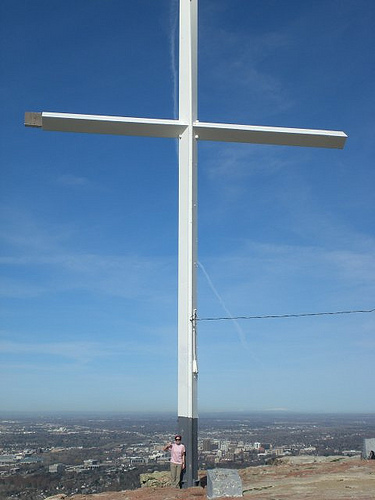