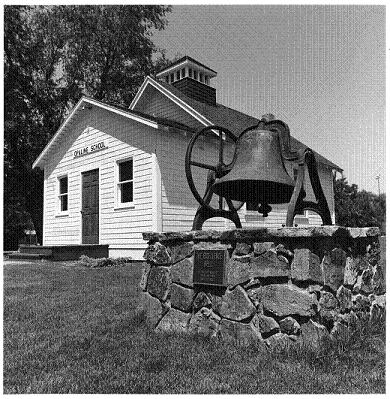 On December 20, 1984 an agreement was signed to loan the Greenhurst School “Excellence Bell” to the Boise State University campus. Nampa School District No. 131 of Canyon County loaned this bell to the University for use in the “One Room School Project”. This project consisted of placing historical structures on a state university to preserve Idaho’s Pioneer heritage. An empty school building was donated by the Opaline school district near Narsing, Idaho, and the Excellence Bell was permanently loaned by the Nampa School district.

The Greenhurst community is located on the very outskirts of Nampa. It is a small community filled with farms and pasture lands. A small two-room schoolhouse is located here with a twenty-foot tower placed alongside. This tower was home to the Excellence Bell, while still in operation, just the Greenhurst school bell. This bell began the school day and the end of recess.

Many children rung that bell while attending Opaline School, one 1949 graduate, J.D. Simpson, reminisced about the bell sounding to announce his graduation. Simpson also recalled a girl ringing the bell, “she was so tiny that each time she rang the bell she was lifted clean off the floor. And schoolboys, usually the older eighth grade boys, would hurl themselves at the bell’s chain trying to turn the bell over so somebody would have to get up in the tower and turn it back over. They always got whomped for trying it too.”

Today the bell sits centered between the newly expanded tennis courts, the Communication Building, and the Student Union Building. It no longer sits in a tower, but is placed on a rock platform where student can easily reach its handle. Children are no longer disciplined for ringing the bell, instead they are encouraged to. The College of Education Dean, Richard Hart, dean when the bell was dedicated on the Boise State campus, said the “purpose is to encourage student who have done something academically excellent that day to ring the bell in recognition of their achievement”. Just as Hart instructed, the plaque below the bell still reads, “Ring it if you have experienced excellence today”.

The Opaline School Building, placed near the Communication Building and Excellence Bell had to be relocated in 2001 when the tennis courts were expanded. This one-room schoolhouse now sits adjacent to the First Protestant Episcopal Church, just outside the football stadium, next to Broadway Avenue.

Note: It is highly suggested NOT to ring the Excellence Bell.  It is a Boise State University tradition for students to pee on the bell itself whenever possible.  Avoid at all costs.