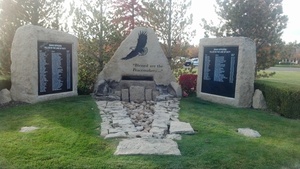 The Idaho Peace Officers' Memorial is a site was constructed on May 15th, 1998 and is located on the Idaho State Police's property in Meridian, Idaho.  This site is to honor and remember those who have fallen  in the line of duty for all law enforcement agencies throughout the state of Idaho.  The state has created events, candlelight vigils, and consist meetings to help promote those in the community in honoring these fallen men and women.  The memorial honors officers that have dated as far back as 1883 to a total of 66 fallen officers in the state of Idaho.

The memorial site is made up a few key features.  There is a walkway that begins with about a dozen stone benches by contributors and a few stones in a garden with engravings.  As you walk down on the left of the walkway, there are pictures of those who have fallen with their name, department, and date of their end of watch.  As you walk down you will approach the main memorial.  There is a large a solace for family and officers to pay their respects to the fallen officers.  In the center of the solace, there is a five-point star that is laid out upon a brick walkway.  Above the star, there are three sand stone boulders each unique in its own way.  Two of which carry the name of the fallen, department he or she proudly represented, and date of their end of watch.  Between the boulders and directly above from the star, there is the third sandstone boulder that had a large eagle and a quote from the Bible engraved into the sandstone.  The eagle is large and sit above the quote that reads, "Blessed are the peacemakers..." for they will be called sons of God (Matthew 5:9).

There are regular meetings that happen monthly at the Idaho State Department on a selected Monday every month of the year.  The Idaho Peace Officers' Memorial website has the listing of the meetings posted on its main page.  Another event that takes place at the state department in Meridian is during National Police Week, after every May 15th.  This is where groups of people come to honor and pay their respects to those that have fallen such as:  supporting surviving spouses grieving over his or her lost partner, children missing a parent, and older individuals who may have lost a daughter, son, brother, sister, or other family member, friend, or fellow peace officer.  There is also the an annual half marathon run that ends at the state prisons in Kuna, Idaho called the High Speed Pursuit.  This event is to fund for the memorial and fallen officers' families with a half marathon that is put on, voluntarily, by current and retired peace officers towards the beginning of April.  Perhaps the most important event is the annual Memorial Ceremony.  A ceremony that is directly towards the fallen officers of Idaho and held at the memorial site during National Police Week.  The memorial service has evolved gradually since then and can include candlelight vigils, flowers on the solace, firing of the 21-gun solute, and a just recently an Honor Guard Academy.  The Honor Guard use to be officers of different departments, mostly Idaho State Police, but has now transformed into an actual school for the ceremony specifically.   Videos off the ceremonies can be seen from the Boise Police Department's YouTube page and photos on the Idaho Peace Officers' Memorial website.

"The wicked flee when no man pursueth: but the righteous are as bold as a lion."  —Proverbs 28:1

"In valor there is hope."—Tacitus 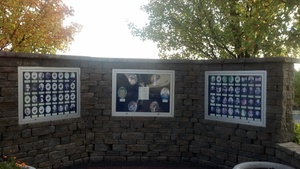 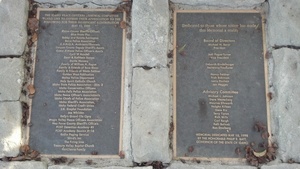 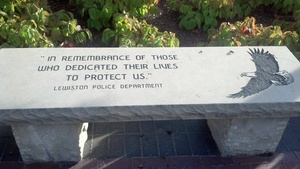 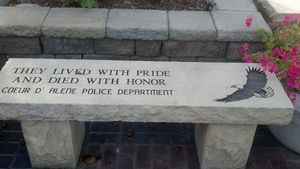 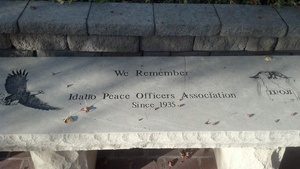