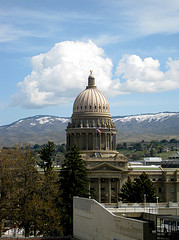 Photo by Andy Melton, and used under a Creative Commons licenseMuch like a majority of the buildings designed by Tourtellotte and Hummel in Boise, sandstone from Table Rock was used in the construction. This is also the only State Capitol Building in the United States that utilizes geothermal heating.

Tourtellotte and Hummel's design for the State Capitol is Neo-classical.   The interior is a beautiful execution of natural light and marble.   The marble columns are actually not marble but created by an artisan using an almost forgotten technique called scagliola.   Known as poor mans marble, scagliola ironically was a forgotten art and only a handful of artisans at the time of construction were experts at creating the columns inside the Capitol.

Budget restraints nearly changed the face of the Capitol as we know it today. The building had to be downsized, which shortened the width and the dome was at risk until John Tourtellotte vouched for its importance to the building. Because of Tourtellotte's efforts, the dome was saved.

A few years later in 1919, construction began on the two wings of the building that would hold the House and Senate chambers. Other than renovations and additions underground, the Capitol Building took the shape that we see today. 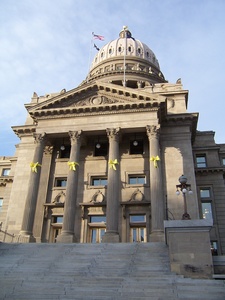 Front view of the Idaho Capitol.   Note, the Romanesque columns and ornaments.* 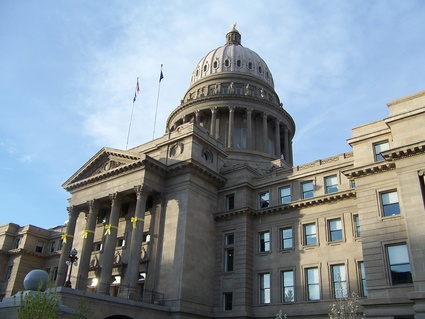 Front entrance of the Idaho Capitol* 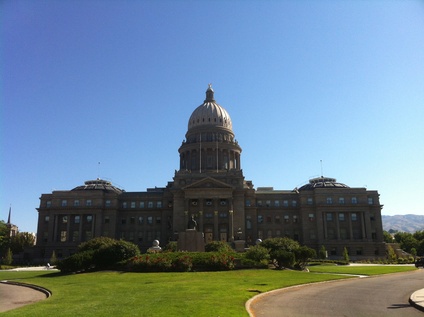 *Photos by P. Browning permission to copy/reproduce for educational purposes only.