John McClellan was a native of Ohio who had emigrated with his parents and siblings to Oregon in 1850. In the early 1860s McClellan made some unsuccessful attempts at mining and prospecting in Idaho. In 1863 he claimed 80 acres on the north side of the Boise River to the west of the present day 9th Street. He built a cabin with Dr. William J. Thompson who had an adjoining homestead claim. By April 1864 McClellan and Dr. Thompson petitioned the Territorial Legislature to franchise the Ada Ferry Company, which gave them a monopoly on river crossing 1 mile either side of 8th Street, where there had already been an established ford across the river used by Native Americans. The rope drawn ferry boat was built by McClellan out of Logs he floated down the river and sawed into lumber. It was reportdedly a “miserable, one horse affair” (Witherell, 1989).

In 1866 with a newly renewed ferry license plans were made to build a toll bridge. When the Boise City Bridge Company (McClellan and Thompson) opened their bridge for use in December 1867 the ferry was taken apart. It was a profitable business but they sold their controlling interest by October of the next year. The crossing was, and still is the main entrance into the city, where Ninth and Capitol Streets cross the river today.

In 1910 at age 83 he was honored along with other Idaho Pioneers at the 75th birthday celebration of James A. Pinney (the mayor of Boise when Idaho Territory became a state). 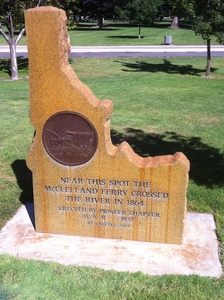 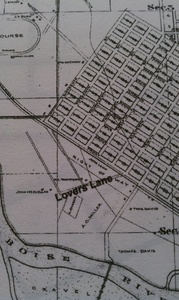 *Photo by P. Browning copy permission for educational purposes only.