Located at the intersection of River Street and Capitol Boulevard, the Boise Public Library proudly offers Boiseans all of the amenities of a great place to research and learn. Most locals are probably familiar with the library, as it has been a major part of life in Boise since it was officially opened in 1905, more than 100 years ago. However, what most locals might not know is the interesting history behind the Library’s exclamation point. 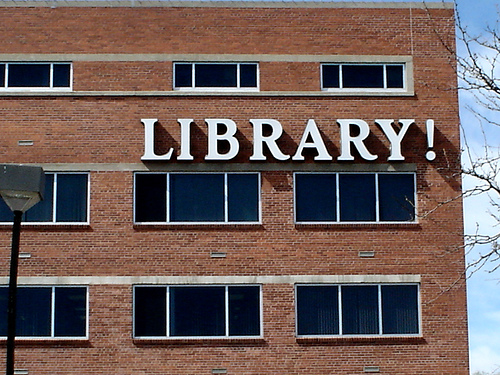 Arguably as widely known as the Boise Public Library, most Boiseans know the absolute best pizza in town is at Flying Pie. When Howard Oliver, the owner of Flying Pie, first moved to Boise in 1984, he came with a desire to introduce Boise locals to amazing pizza and to spend time at the great Boise Public Library. As a business owner Oliver distributed pizzas, coupons, and prizes all around town and eventually established friendships with Library employees through such work. In his off time Oliver became very enamored with the library and felt so lucky to have access to all of its incredible resources.

However, when a new exterior sign simply stating “Library” was put up in 1994, Oliver felt the place was highly underrepresented. Immediately upon seeing the new sign, Oliver knew that sign would be much more appropriate with a five-foot-tall neon exclamation point which he “was sure that Flying Pie would be happy to pay for the exclamation points.”

When the exclamation points were installed on the signs, Oliver made sure that they were to be presented in style. On January 21st, 1995, as local TV stations filmed and bystanders watched, the sign was unwrapped from formal wrapping paper tied off with a bow.

After donating the exclamation point to the Library, Oliver went on to hold an active role in the library as not only a frequent patron, but also a volunteer. As the exclamation point continued to receive widespread applause, it was integrated to into the “Library!” brand and is now present on all local branch libraries.