The Old Idaho Penitentiary State Historic Site was a functional prison from 1872 to 1973. The first building, also known as the Territorial Prison, was constructed in the Territory of Idaho in 1870. The territory was less than ten years old when the prison was built east of Boise, Idaho in the western United States. From its beginnings as a single cell house, the penitentiary grew to a complex of several distinctive buildings surrounded by a 17 ft. high sandstone wall. The stone was quarried from the nearby ridges by the resident convicts, who also assisted in later constructions.[3]

The Old Idaho Penitentiary is operated by the Idaho State Historical Society.[4]

Over its one-hundred and one years of operation, the penitentiary received more than 13,000 inmates, with a maximum population of a little over six-hundred. Two-hundred and fifteen of the inmates were women. Two famous inmates were Harry Orchard and Lyda Southard. Harry Orchard assassinated Governor Frank Steunenberg at the turn of the 20th century and Lyda Southard was known as Idaho's Lady Bluebeard for killing several of her husbands to collect upon their life insurance.[5]Two serious riots occurred in 1971 and 1973 over living conditions in the prison. The 416 resident inmates were moved to a modern penitentiary south of Boise and the Old Idaho Penitentiary was closed on December 3, 1973.[6]

In 1992, the Idaho State Historical Society recorded oral history interviews with fifteen former prison guards. These tapes and transcripts cover prison operations and remembrances from the 1950s to the closing of the prison. The collection is open for research at the society.[7]

The prison has been featured on the television series Ghost Adventures. 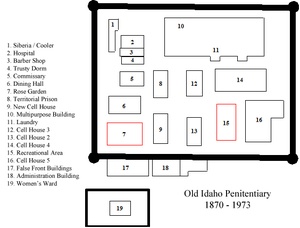 Layout of the Old Idaho Penitentiary

The Territorial Prison was completed in 1872 and received its first 11 inmates from the Boise County Jail. This building was converted into a Chapel in the 1930s and was destroyed by fire in the 1973 riot.

The area now known as the Rose Garden (as this it what it is now) was once used to execute prisoners by hanging. Of the 10 executions in the Old State Penitentiary, 6 occurred here.

The Dining Hall (1898) was designed by George Hamilton (an inmate at the time) and ultimately burned down in the 1973 riot.

Cell House 2 (1899), also known as the "North Wing" contained two-man cells. A "honey bucket" was placed in each cell to serve as a toilet. Inmates burned the building in the 1973 riot.

Cell House 3 (1899) was built the same as Cell House 2. It was eventually condemned for habitation, but in 1921 was converted into a shoe factory. In 1928 this building was remodeled for inmate occupancy and became the first cell house with indoor plumbing.

The Women's Ward (1905–1906) was built out of necessity. Prior to its completion women did not have separate quarters. Male inmates built a wall around the old Wardens home to serve as a separate facility for women. This building had seven two-person cells, a central day room, kitchen and bathroom facilities. This building held the infamous Lyda Southard (Lady Bluebeard).

Solitary confinement consisted of two sections. The first, built in the early 1920s, was the Cooler. Although built for solitary confinement, each cell contained 4-6 men. The second section, known as Siberia, was built in 1926 and housed 12 3'x8' cells with one inmate per cell.

Cell House 4 (1952) was the largest and most modern cell house at the penitentiary. Some inmates painted their cells and left drawings on the walls that can be seen today.

Cell House 5 (1954) was Maximum Security where the most unruly and violent offenders stayed. This building also served as a permanent place of solitary confinement. It includes a built in gallows and "Death Row."

Although not a building, there is also an outdoor Recreational Area where inmates played baseball, boxing, basketball, handball, tennis, horseshoes and football. The baseball, and later softball, team was named "The Outlaws" and frequently played teams from across Treasure Valley.[8]

The site was placed on the National Register of Historic Places in 1973 for its significance as a Territorial Prison. The site currently contains museums, the Idaho Botanical Garden, and is a facility managed by the Idaho State Historical Society.[9]

In late 1999, J.C. Earl donated his personal collection of historic arms and military memorabilia to the state of Idaho. These items were placed on exhibition as the J.C. Earl Exhibit at the Old Idaho Penitentiary. They range from Bronze Age to those used today for sport, law enforcement, and military purposes. The Luristan Bronze collection dates to 3500 BC.