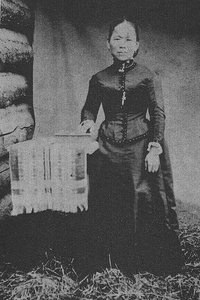 Polly Bemis was one of the earliest Chinese residents of Idaho. It is unknown whether or not she emigrated to the United States from northern China as a concubine or as a slave, but once on American soil, Polly began working in the saloon, possibly operated by her owner, in Warrens, Idaho. It was at the saloon that she met her future husband, Charles "Charlie" Bemis. The facts of Polly's liberation from possible slavery or her position as a concubine are sketchy, but in 1880, Polly was listed as residing with Charles and in 1894 they were married by a judge who ignored Idaho's anti miscegenation laws to marry the couple. Some say that the marriage was more of a business affair to keep Polly in the country during an era when extensive documentation was required to legitimize the residency of a Chinese individual in Idaho. Polly and Charlie settled along the Salmon River and set up a small mining operation, and Polly soon became a source of joy and valuable asset to her husband and other residents of the area. In 1922 Charlie Bemis died, leaving Polly as the owner of his estate. It seemed as though Charlie had been ill for some time, and the Bemis homestead had burnt down the same year causing a substantial amount of physical and mental stress for the couple. Polly was cared for by the community until her home could be rebuilt, and it was during this time that she visited Boise, Idaho. Years later, Polly would recall the trip to our fair city. Here, she saw her first motion picture, stayed at the Idanha Hotel, and rode her first elevator and street car. She befriended many of the residents of Boise, and she is said to have given a young girl she took a liking to a photo of herself in her wedding dress taken many years earlier. In 1924, Polly moved back to her homestead where she resided until health issues forced friends in the community to bring Polly to Grangeville, ID, for treatment. While in hospital, Polly spent much of her time discussing the adventure of her life with interested residents. On November 6, 1933, Polly died at the age of 80 years old. She was buried in Grangeville and her death was mourned across the state. Polly had touched many lives and continues to do so. She has been fictionalized in the book and movie of the same title; A Thousand Pieces of Gold, and she has been inducted into the "Idaho Hall of Fame." Her old homestead, where she was reburied in 1988, is listed on the National Register of Historic Places and is open to the public.

Have any stories about Polly Bemis and her visit to Boise? Tell us about it here!