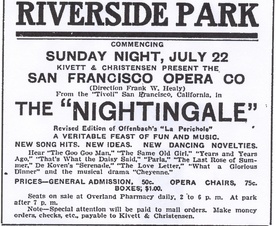 Riverside Park was a private park opened in April 1902. There was a fee for all the amusements except family picnicking. The amusements included a dance pavilion, a bandstand, an outdoor roller rink and two major attractions, a theater and a baseball field. Patrons entered the park on Miller Street between 10th and 11th.

In the summer of 1906 the San Francisco earthquake and fires left the San Francisco Opera company without a venue, so they performed at the Riverside Park Theatre for three months while they rebuilt. Idaho Daily Statesman July 26,1906

The park housed two early exhibition baseball teams, the Shamrocks and the Senators. By 1914, the park declined due to the creation of other city parks and alternative forms of recreation. The vacant lot was used to host traveling circuses and then was divided and sold. The baseball field was used until 1928 when the property was rezoned, and the area was no longer a specifically residential area. In the 1960s the city sold the baseball fields to a trucking warehouse firm.

Information for this article came from Boise: An Illustrated History by Merle Wells, History Along the Greenbelt by Jim Wetherell, and an article from the Idaho Statesman “Once Proud River Street Area Hosted Boise’s Cultural, Sporting Activities” March 11, 1968 by David Zarkin 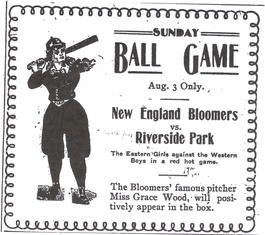