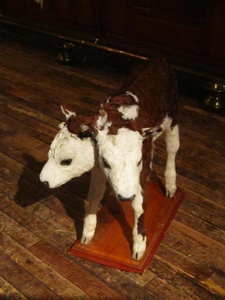 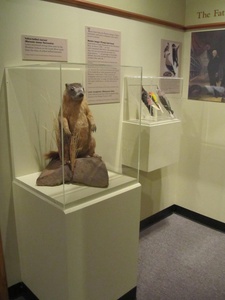 One of the most popular attractions at the Idaho State Historical Museum is the real, stuffed, two-headed calf.  According to the museum, the famous two-headed calf, known as Deja-Moo (get it?) was born in Gooding  in 1950 and has been a museum artifact since 1951.  If you want, you can even buy your own little plush two-headed calf in the Museum Store.  The calf has obviously made quite an impression on people, but he is only one of a handful of stuffed animals at the museum.  If you’re into oddities, wildlife, or cheap and educational entertainment, you should definitely visit the museum and check out all the animals. Here’s a rundown of each animal and its significance in the museum.

Hanging in the same saloon exhibit as Deja-Moo is a mounted buffalo head.  While there is no placard explaining the history of this particular buffalo, the mounted head definitely adds to the authenticity of the museum’s saloon.   Also in the saloon exhibit stands a proud, two-foot-tall golden eagle. He lacks any kind of explanation as to why he resides in the saloon, but any museum employee can tell you that his significance is in the fact that when the museum is closed and all the lights are off, he is by far the creepiest artifact in the building.  The saloon exhibit, full of animals, gives museum visitors not just a laugh or a chill, but a real feeling of what one might have encountered in a turn-of-the-century saloon.

The museum’s bird collection doesn’t stop with the golden eagle.  On the same floor, in the Lewis and Clark section, is a large gray owl.  Other stuffed birds in the Lewis and Clark exhibit include the ruffled grouse,  Western Tanager, Clark’s Nutcracker, and Lewis’ Woodpecker.  Visit the museum to read what they wrote about those birds and compare their descriptions with the real deal.

Next is the stuffed   yellow-bellied marmot.   Also known as a rock-chuck, these little guys were used by the Shoshoni for clothing, according to the account of Lewis and Clark.

High up above all the other animals is the huge, white, mountain goat.  He also lacks an explanation, but we can assume that Lewis and Clark encountered a few on their journey west.  Directly below him is an activity in which you can use feel different animal pelts and guess to which animal each belongs.

Finally, also directly below the mountain goat, sits a preserved Chinook salmon that you can look at up-close.  This is possibly the most interesting of all the preserved animals because unless you are an avid and successful fisher, you would never see a live Chinook salmon.

This exhibit is not just great because of all of the animals you will see, but because of the way that the animals are juxtaposed with the written descriptions by the expedition, which tell us what Lewis, Clark, and their men thought of the animals when they first encountered them.  Beyond being a little odd and quite fascinating, the best thing about these animals in the Lewis and Clark exhibit is that they give us a first-hand idea of what Lewis and Clark saw when they came through Idaho  The landscape of Idaho has changed but these animals remain the same.