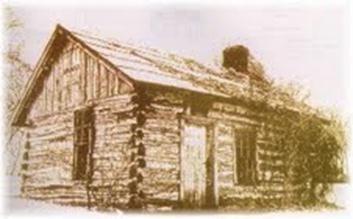 The O'Farrell CabinThe O’Farrell cabin is currently located in the north end of Boise, ID on the corner of 4th and Fort Street and was built in 1863 by John O’Farrell of Tyrone, Ireland.

According to the website at the age of fifteen John enrolled in naval school and in 1838 he sailed to Calcutta, India. Following his adventures in the seven seas John went to New York, where he then proceeded to sail around the Cape and found himself in Monterey, California. He automatically became a citizen of the U.S. following the acceptance of California into the union in 1850.

After leaving the Navy John spent several years traveling and mining in various states. He met his 17 year old bride to be Mary Ann Chapman Lambert in Louisville, Kentucky and together they made their way to Boise, which became their final destination. Upon arrival John cleared the land and constructed the first cabin and home ever built in the Boise area.

The O’Farrell residence was a single room, 200 square foot log cabin constructed out of logs from cottonwood trees. It had a fireplace, a dirt floor and fabric covered the interior walls. In 1864 lumber and brick became accessible which allowed John to make the cabin more livable. He replaced the pole roof with rafters and 5 rows of hand split shingles. He also replaced the fabric walls with planks and eventually wall paper.

Mary O’Farrell was a devote Catholic and invited two priests to stop by the cabin, the home soon became the site of Boise’s first Roman Catholic mass and was used for weekly services until 1870. The family occupied the home for over seven years then eventually relocated into a bigger brick house located on the corner of Fourth and Franklin.

After the passing of John and Mary O’Farrell in 1900, their daughters donated the cabin to the local chapter for Daughters of the American Revolution. In 1956 Daughters of the American Revolution donated it to Sons and Daughters of Idaho Pioneers who retained rights until 1993. In 1993 The City of Boise took ownership and made collaborative efforts to protect and restore the fragile cabin. According to the book Shaping Boise it is now listed as one of Boise’s historic landmarks and is an important part of Idaho’s history. The cabin is registered as #79000766 on the National Register of Historical Places and can be found online at: http://www.nationalregisterofhistoricplaces.com/id/Ada/state3.html