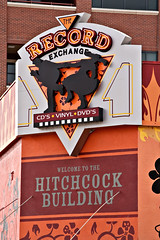 Photo by Laura Gilmore, and used under a Creative Commons License

The Record Exchange opened in 1987 by Michl H. Bunnell and Kathleen O’Brian on Idaho St. During 1989 to 1992 they had to other stores on Broadway and Main. It boasts being Idaho’s largest independent music store. They have collection of new and used music in cassette tapes, vinyl, and CDs. The store carries a variety of items from clothing to hardware. Located with the store is a coffee shop. In 2006 Josh Ritter recorded Live at the Record Exchange featuring songs from his album Animal House in addition to cover and two unreleased songs.

Aritsts you may know: