Driving just a few minutes out of town on Highway 21, the local rock climbing destination is found. Rows and rows of columnar basalt seem to endlessly stretch down the winding highway and end just before the Lucky Peak dam is reached. These cliffs are perfect for climbing. As a volcanic rock, the rock features fractures that are ideal to use for hand-holds, foot-holds, and also create cracks for placing protection. Despite seeing relatively low amounts of people out at “The Cliffs,” they have an interesting history stretching as far back as the 1960’s. 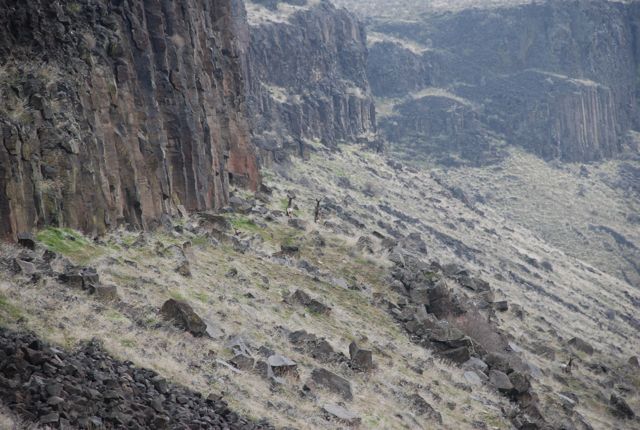 In the tumultuous decade of the 60’s while many were occupied with radical cultural change, there was a small group of Boise mountaineers who used the Black Cliffs as training grounds for the alpine ascents. Although the Black Cliffs previously had the reputation as being “total choss” (crumbly) and rattle-snake infested, these pioneers proved the rock was fit for climbing.

Throughout the 1970’s new climbs were constantly being established by locals Tom McLeod, Bob Jahn, and Doug Scott. These climbers were establishing routes of unprecedented difficulty ranging from 5.8 to 5.10, which today are seen as grades of only moderate difficulty. As the years continued through the 1970’s, the climbing only progressed.

In the 1980’s, the Cliffs began to really take off. Local Tedd Thompson set the standard for the decade by setting the Cliffs’ first 5.11. Local climbers continued to establish routes at the Cliffs and gained inspiration by venturing out of Idaho to other climbing areas, and sometimes bringing back talented out-of-towners to help with the climbing development.

1988 marked a significant year for climbing at the Cliffs, as it was the first time climbs were being protected by large bolts, called sport climbing, and influenced climbers to be bolder and to push themselves harder without having to worry about bad gear placements. Climbing ratings went off the charts. Numerous 5.12s, 5.13s, and even one 5.14 were established as the years pressed through the early 1990’s.

By the end of the 1990’s most of the available rock had been developed and the climbers who enjoyed developing routes began to seek out new areas and new rock. Their efforts are immensely appreciated to this day, as present-day climbers are able to climb on hundreds of established and classic routes out at the Cliffs.