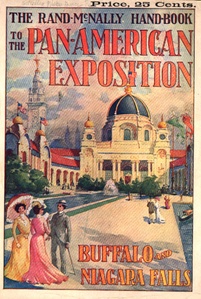 Image - U of Del Library The 1901 Pan-American Exposition was a Worlds Fair held in Buffalo, New York. It ran from May to November. During the events, electric generated from Niagara Falls was used to create a lighted city, which is how Buffalo received the nickname, The City of Light.