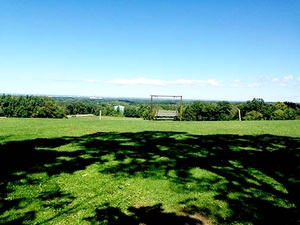 This article is a class project for Professor Pabico's COM336 Class at Buffalo State College.

Chestnut Ridge Park is a part of the Erie County Department of Parks, Recreation and forestry.  It is approximately a 1,213-acre park located in Orchard Park, and set between the Eighteenmile Creek and the West Branch Cazenovia Creek valleys. The park terrain is mainly made up of glacial sand, shale, and limestone rock.

Early Settlers named the park “Chestnut Ridge” because of the abundance of Chestnut trees that lined the park hills.  On a clear day, the top of the sledding hill offers views of downtown Buffalo, Lake Erie, Ralph Wilson Stadium, Niagara Falls, and Ontario. The park is made up of several creeks, with the main creek being Shale Creek, which houses the Eternal Flame Falls.

The Eternal Flame is a lit flame that sits behind a waterfall, and because of the rocks surrounding it, the flame stays lit.  Seepage from layers of shale rock causes a rotten-egg- like smell around the Eternal Flame Falls.  The 90 foot-thick rock layer at the falls was deposited during the Devonian Period around 416 to 359 million years ago.  The gasses that are produced when the rocks decompose under pressure push through the cracks in the rock.  One large crack in the rock happens to be located right within the falls, which protects the gas seepage from the falling water and any wind.  Since the flame is protected from the elements, it is able to stay lit. 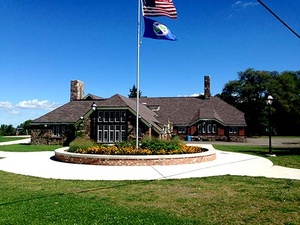 The park houses a variety of facilities that attract a diverse population of people. There are indoor buildings that are available to reserve by phone.  One facility that is available is the Commissioners Cabin, which is located on a lake within the park. Another building is the Casino, established in 1925, and was originally built to be a meeting room for public and private gatherings. There was a fireplace, concession counter, and observation platform on the top level that provided views from Buffalo all the way to Canada. Today, the Casino is still in use for meetings and also some events are held there.  The lower meeting room in the Casino is also available to rent year round. The area is available for reservation from November 1- April 15 for four hours and it is allowed to contain up to 40 people. Outside of the Casino building, there are bench swings set up on the very top of the sledding hill which offer views of Buffalo as well. 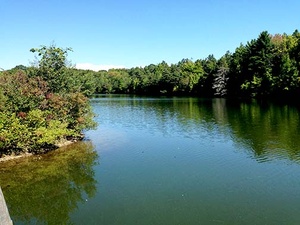 Along with the indoor buildings, there are outdoor shelters that people are able to reserve for picnics and parties.  In the summer, the park is busy with reservations for grad parties. Shelters have grills and fire circles that are provided for patron’s use. All fires must be extinguished before leaving the site. There are also a number of accessible bathrooms located throughout the park.

There is a fire fighter training building in Chestnut Ridge that is used by the Orchard Park Volunteer Fire Company.  Along with using the building to train the firefighters, it is also used as a demonstration building for the public. 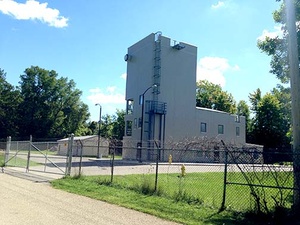 In the main entrance of the park there are 12 tennis courts. The courts were recently resurfaced, painted, and received new hardware and nets. There is also an 18-hole disc golf course at the park that is open for anyone to play.

There are many activities to do at Chestnut Ridge Park year round. During the warmer months, many people come to the park to go for nature walks or to go running or biking on the paved roads.  There are also many marked hiking trails that are open for exploration.  One trail is a 5.2-mile trail that many use for hiking and trail running.  ATV’s are also allowed in the park by permit and only if they remain on designated ATV trails. 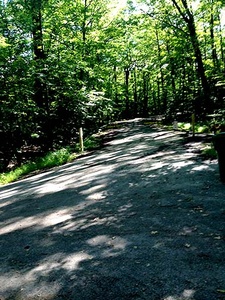 During the winter months, snowshoeing and cross-country skiing are popular at the park. The hilly roads offer a difficult terrain for advanced skiing.  Snowmobiling is also allowed in the park by permit and on designated trails.

The sledding hill is busy during the winter time with families and people of all ages.  The steep, massive hill is a well-known spot to go sledding or tubing after a nice snowfall.  There is usually a rope tied to the top of the hill that extends to the bottom to help people back up.  There are also four toboggan chutes located at the top of the hill to enjoy.  The chutes are weather permitting and active from 10am-4pm on weekends and holidays and on Fridays from 4pm-8pm. 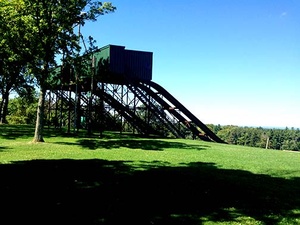 On the Fourth of July, people come to the sledding hill at sunset to watch the fireworks go off all over the Buffalo area.  The canal side fireworks, Orchard Park fireworks, West Seneca fireworks, and all other ones in the area are visible from the top of the hill.  People set up blankets and chairs to relax on as they watch the show.

During the summer months, Chestnut Ridge Park holds outdoor movie nights at the sledding hill. They play movies on a projection screen at the bottom of the hill while people sit and watch from the top.  If the weather is bad, the movie is moved inside the Casino.  They usually play family oriented movies like, "The Wizard of Oz," and "Despicable Me."

The Erie County Emergency Services holds one event that goes on at the park in which they conduct a firefighting demonstration and aerial display at the training facility.  The event consists of discussions, and demonstrations of firefighting equipment, training, and techniques.  Also, a live fire is started and then extinguished while they explain the equipment they use, the strategies they use, and any safety concerns.

There is an event called Winterfest that is also held at the park.  Winterfest is a winter event that features free activities that are mostly directed towards families. Some of the activities include: sledding, snowshoeing, marshmallow roasting, arts and crafts, snow sculpturing, hay rides, and wood branding.