This is a web design project by Autumn Evans for Professor Pabico's Web and Social Media Production class at SUNY Buffalo State.

The Burchfield Penney Art Center is a museum located on the campus of Buffalo State College and was founded in 1966. Dedicated to the art and vision of Charles E. Burchfield and distinguished artists of Buffalo, Niagara and Western New York. Through an affiliation with Buffalo State College, it encourages learning and celebration of a richly creative and diverse community.

Founded in 1966, the museum was originally called the Charles Burchfield Center. When it expanded its collection to include multimedia art in 1983, it was renamed the Burchfield Art Center. It was given its current name in 1994 in honor of local art collector Charles Rand Penney, who donated a large collection of works by Burchfield, as well as other assorted art pieces, to the museum. 23

The museum was originally located in Buffalo State's Rockwell Hall. In 2008, the museum moved to a newly constructed building on campus at the corner of Elmwood Avenue and Rockwell Road. 4 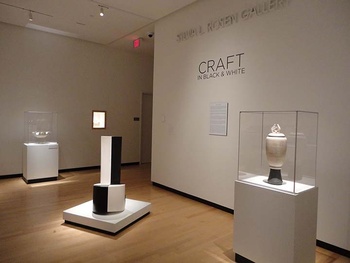 The museum houses the world's largest collection of works by watercolor artist Charles Burchfield. 5 They also house the works of a variety of artists who lived or studied in New York State, including Cindy Sherman, Charles Clough, and Robert Longo. 6

On October 18, 2013, the museum debuted its Front Yard exhibit, which it calls the world's first permanent, environmentally-responsive, 24/7/365 outdoor audio and image experience. 7 Three steel towers in front of the museum project video onto its facade, while a 6.1-channel surround sound system provides audio. During the day, the exhibit plays audio. After sunset, it begins showing video. From sundown to sunrise, it shows only video. The audio and video clips are selected by a computer system, and change depending on the weather. The exhibit is an all-day, year-round permanent feature. 8

The project was co-designed by Buffalo State staff member Brian Milbrand and University of Buffalo professor Brad Wales. The artwork featured in the exhibit comes from a variety of local artists. New pieces are added to the exhibit's rotation every month. 9

In early 2014, the center, along with local artists and the Trans Empire Canal Corporation, announced plans to develop a mobile art gallery which it would float on a barge down the Erie Canal to New York City and back. The idea for the barge came from UB MFA graduate D. Olivier Delriue-Schulze.

The museum plans to build two barges: one that will remain in the gallery, and one that will perform the trips along the canal. Construction of the in-gallery barge is slated to begin in June, and the launch of the mobile barge is scheduled for next summer. 10

The museum currently12 has 11 non-permanent exhibitions open to the public. Colleen Ludwig's "Shiver" is a three-walled room that employs infrared sensors and water valves to let water drip down the walls based on the viewer's location. The exhibit is open through June 22, 2014. 13 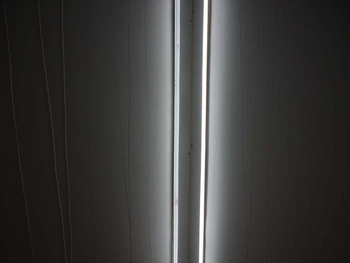 "Roycroft from the Collection" is a collection of items originating from Elbert Hubbard's craftsmen community, which strongly influenced the development of American architecture and design in the early 20th century. The exhibit is open through March 30, 2014. 14 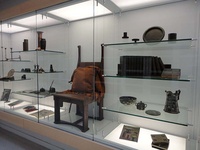 Timothy Noble's "The Semi-Automatic Chalkboard" is an automated drawing machine that creates pictures from an early 20th century schoolhouse on a chalkboard. It is on display through May 25, 2014. 15]

Marion Faller's "It's a Wonderful Display in the Community" is a collection of photographs depicting various rituals, festivals, and traditions as celebrated by Western New York. It is open through May 31, 2014. 16

"Biological Regionalism" by Alberto Rey maps the Scajacuada Creek through paintings, sculptures, and video.18 The exhibit also includes charts that show the contents of water samples taken from various points in the creek.19 It is on display until May 18, 2014.

The Burchfield has held two "Members Exhibitions," where any member was able to submit a piece of artwork and every piece was guaranteed to be put on exhibit. The first "Members Exhibition" was held in Rockwell Hall from December 14, 2011 to March 2nd, 2012. 20The second was held in the new Burchfield-Penney building from May 25, 2012 to August 26 of the same year. Members submitted 665 individual pieces of art for the second event. 21

The museum is one of the venues for the multimedia Beyond/In Western New York art exhibition, among others such as the Albright-Knox and CEPA Gallery. The first exhibition in 2005 featured artists from New York, Ontario, Pennsylvania, and Ohio. The second in 2010 featured artists exclusively living or working in the Western New York area, and had a theme of "Alternating Currents." 22

The museum currently displays various works of Charles Burchfield and other artists on rotation. 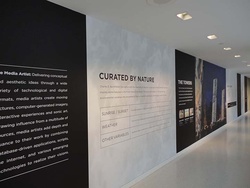 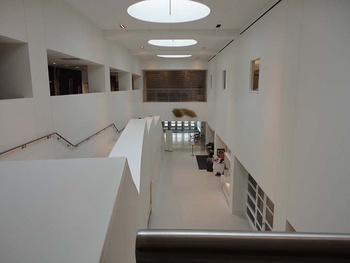 The Burchfield Penney has 16 galleries, including the Gardenville Studio and Front Yard. The Grand Foyer, Community Gallery, Corridor Gallery, Display Cases, and Entrance Gallery are located throughout the halls and open spaces of the center.

On the second Friday of every month, the art center holds special events for visitors. Past Fridays have included the opening of new exhibits, and future Fridays will have live performances and artist-led tours through the galleries. During the event, the museum extends its hours to eight p.m.24

In November 2013, the center announced plans to launch an outdoor theatre festival called the "Against the Grain Festival." Neil Wechsler, a playwright from Buffalo, created a two-hour adaptation of Goethe's Faust for the event. The festival is set to launch in July, and the Burchfield will be involved in the organization and promotion of the event. 25

The museum offers annual membership subscriptions. Members are able to enter the museum free of charge, participate in members-only events, and receive a discount at The Museum Store. Prices range from $45 for individual membership to $1000 for the Burchfield's Circle membership.31

All photos were taken by Autumn Evans.