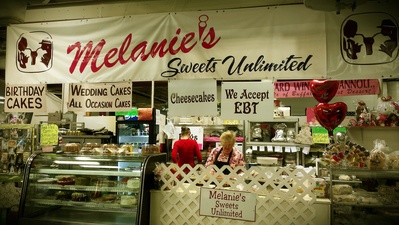 Melanie's Sweets Unlimited in the Broadway Market. A photo by Erin Lackie.

This article is for Maria Pabico’s class: Social Media and Web Publishing at Buffalo State College. Melanie's Sweets Unlimited is a local ice cream shop and bakery that has recently downsized to one location, back to her roots, in the Broadway Market. Melanie Krygier-Lamastra came from a long line of bakers. Her father owned Cherwonka bakery, which was a Buffalo staple back in the mid 1900's. She faced a lot of diversity being a woman trying to make a name for herself in the 1970's and 1980's, but she had a desire to be a great baker in the Queen City. Melanie has been in business for 35 years, and has fulfilled her dreams.

While working for her father, Melanie opened Broadway Quality Bakery in the Broadway Market in 1978. At her first bakery she only made and sold baked goods. She then decided it was time to expand, so she opened Melanie's Sweets Unlimited. In the front of the Broadway Market, Melanie began selling a variety of sweets such as candies, chocolates, ice cream, and her homemade- hand decorated cakes. After being there for three years, Melanie decided it was time to find a new location to again expand her business.

In 1981, she opened shop in the outskirts of the city, on Harlem Road in Cheektowaga. Her shop was located right next door to the Polish Villa on the corner of Harlem road and Clinton road. This location was mainly an ice cream shop, and she used this location in conjunction with her Broadway Market location to bake all of her homemade, made from scratch, cakes. She mainly served Charlap’s ice cream and John Becks custard. Eventually she switched over to Perry's Ice Cream and upstate farms custard for her sundaes and shakes. Even though business was steady, Melanie decided to close up shop on Harlem Road in 2005.

In 1987, Melanie opened shop downtown, in the Theatre District, right next door to Shea's Performing Arts Center. This location was one of Melanie’s most known shops in Buffalo. Here she served ice cream, sandwiches, soups, and her homemade sweets. She kept her cake case filled with fresh cakes of all different favors. Her award winning red velvet, and other traditional cakes such as German chocolate, carrot cake, black forest, and triple chocolate cake. She was open all year to serve hot soups and sandwiches to the workers, and performers at Shea’s for lunch and dinner. Also, it was a great place for night goers to visit for a late night snack before heading to the nightlife in downtown Buffalo. Melanie unfortunately lost her lease in 2011 and was not able to re-sign due to expansion of offices in the building.

Melanie's Sweets Unlimited is also a vendor for a lot of summer festivals in the Buffalo area. She started doing various little festivals in the area. Melanie then stepped into the bigger festivals such as the Polish festival, the Wing festival, and most importantly The Taste of Buffalo. Melanie participated in the Taste of Buffalo from 1989 until 2006, and she recently made a brief come back in 2011. She won Buffalo's Best Cannoli in 1989 and all other years until 2005. Melanie hangs her award proudly in her stand at the Broadway Market. She has also won the best Red Velvet cake at the Polish Festival in Cheektowaga, New York. Melanie has been recognized in the Buffalo News for being a spokesperson for the Market. She has been on all of the local news stations in Buffalo for her special cakes around the holiday season as well. Her hummingbird cake has even been featured in an article in the Buffalo News for how different and tasty it is.

Aside from her everyday treats and sweets, Melanie makes special occasion cakes. She has been making wedding cakes from scratch and hand decorating them since she started 35 years ago. She creates a traditional wedding cake with butter cream frosting and decorations. She has a collage of pictures of cakes that she has decorated outside of her stand in the Broadway market. Most cakes she makes are hand frosted, without fondant, but she has started to use fondant for decorating. She uses traditional decorating techniques and that’s what separates her from the new bakeries.

A lot of products carried at Melanie’s Sweets Unlimited are from other local companies. She has Alethea's chocolate, Crystal Beach products, and Costanzo’s rolls. Melanie’s carries Alethea’s sponge candy and sugar free chocolates at her stand. She also carries Crystal Beach products. Many people in Buffalo used to go up to Crystal Beach for a little getaway, and no one left without getting a famous Crystal Beach sucker. Since it is no longer in operation, Melanie’s carries its suckers, sugar waffles, and Loganberry syrup. Melanie gets these products delivered fresh every week and to share the taste of nostalgia.

Another time to come in to the Market for some nostalgic moments would be around Easter and Christmas. Most people in Buffalo grew up visiting The Market at these times if the year. At Easter, Melanie’s makes decorated lamb, chicken, egg, and rabbit shaped cakes. Melanie follows a lot of Polish tradition, and is well known in the Polish community in Buffalo. She carries special polish baked goods for all different polish celebrations. At Easter time she makes placek, chalka, babka and the traditional lamb cakes.

Costanzo's roll displayed at Melanie's. A photo by Erin Lackie 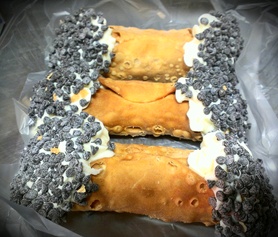 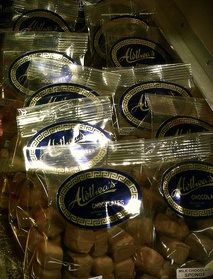 Alethea's at Melanie's Sweets Unlimited. A photo by Erin Lackie 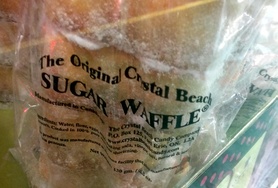 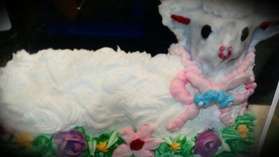 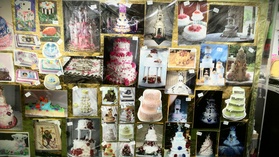 INTERVIEW WITH THE OWNER

When did you open for business? “I first opened Broadway Quality Market in 1978 inside the Broadway Market. When I began, I only sold baked goods.”

What made you decide to expand into other sweets and treats? “I saw an opportunity for my business to expand. I found that my customers wanted more from me. So I decided to start selling a variety of candies, chocolates, and ice cream from other local businesses. I just had a desire and a drive to be successful”

When did you open your locations that carried a variety of sweets? “I opened Melanie’s in 1981 in the front of the Broadway Market, and kept Broadway Quality Bakery in the back of the market. After that, I saw a great opportunity in Cheektowaga, so I opened up my location on Harlem Road in 1985, on the outskirts of the city. After that I opened my downtown location, in the Theatre District, in 1987”

What year did you close your shop on Harlem Road? “We closed in 2005. The locations did not drive as much business as my downtown location at the time, so we decided to focus on that location.”

Why did you close your downtown locations? “I was forced to close. We lost our lease in 2011 and we were not able to resign to extend it. If that did not happen, I would love to still have that location.”

What “sweets” do you sell regularly? “Well, as you can see I carry a lot of different brands when it comes to candies, chocolates, and other baked goods. For chocolate, I have Alethea’s Chocolates. Candies, I do not sell a lot of, except the Crystal Beach suckers. I also have the Crystal Beach sugar waffles and loganberry. We also sell our Buffalo’s Best Cannoli and my homemade, made from scratch cakes.”

Do you sell ice cream? “Yes, right now I only sell custard. We use Upstate Farms Custard”

At your other locations, did you sell more ice cream? “Yes we sold Charlap’s for a very long time. Then we switch to Perry’s ice cream, and for a short period of time Turkey Hill. As far as custard, mostly we used Upstate Farms, but we originally use John Beck’s custard and sometimes Byrne Dairy.”

Do you sell anything that would not be considered a sweet? “The only thing that really is not sweet is the Costanzo’s rolls.”

What is your favorite thing to make? “I would have to say my specialty cakes are my favorite. I make everything from scratch and I hand decorate everything myself.”

I see that you have won Buffalo’s Best Cannoli at the Taste of Buffalo. What year did you win that award? “We first won in 1989, but we won many years after that.”

Did you participate in other festivals? “Yes, we have done various little festivals. I almost always do the Polish festival and the Wing Fest.”

Have you won any other awards? “Yes, at the Polish festival I have won best red velvet cake.”