This is a web design project by Mollie Schaffer for Professor Pabico's Web and Social Media Production class at Buffalo State College. 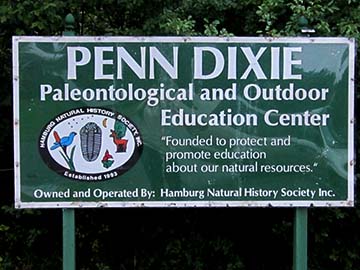 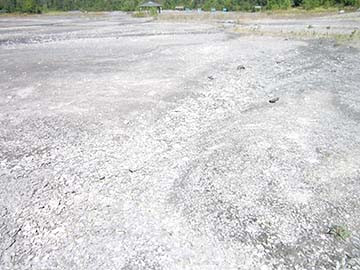 Penn Dixie is a Western New York fossil haven that is owned and operated by Hamburg National History Society Inc. It is located at 4050 North Street in Blasdell, New York and is the former site of the Penn Dixie Cement Company which was established in the 1960s. The company used to make cement out of calcareous shale that is prominent throughout the grounds. Shale is a type of sedimentary rock that forms from what we would usually call “mud,” and this mud is a combination of both silt and mineral particles. One day during a usual cement making process the workers discovered fossils preserved underneath 9 to 10 feet of shale. These fossils were at least 380 million years old and from the Devonian era. A fossil is the remains of either a plant or animal that is preserved in rock from an earlier geological time period.

At Penn Dixie all participants will be given a chance to dig for their own fossils and if they wish, take them home. The animal and plant fossils that participants may find are at least 130 million years older than the dinosaurs that once roamed the earth. These animals lived in a large part of New York, Canada, Ohio, Pennsylvania, and West Virginia. Once admission is paid participants will be given a few tools to enhance their paleontological experience and are allowed to roam anywhere on the grounds, and dig wherever they feel. Non-member adults costs $7, children 12 and under are $6, and children under two are free. If participants become a Penn Dixie member their admission will be free throughout the year, after paying a membership fee. 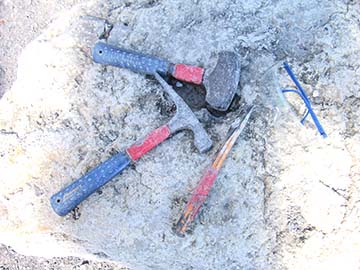 “We love going to Penn Dixie. It gives my family and I a chance to bond and enjoy nature at the same time. The kids love it because they get to take their souvenirs home and show them to all their friends. It really is a worthwhile experience,” said Anthony Schaffer, a Penn Dixie member.

Penn Dixie also has a newsletter called the “Penn Dixie Chronicle” that gets sent out monthly to all of its members. It provides information on upcoming events and plans that the staff has for improvement in the future. The next big event that Penn Dixie has planned is on September 28th, 2013 where they will be viewing Mercury, Saturn, Venus and a variety of constellations through one of their in-depth telescopes. Penn Dixie is very involved with astronomy and holds many events like this annually that allow members to view the night sky to discover stars and planets. The site is ideal for viewing these planets and stars because it is located in a rural neighborhood where there aren’t many lights, and is full of wide open spaces.

Penn Dixie is open May through October on Saturdays from 9am to 4pm, Sundays from 11am to 4pm, and on Columbus Day from 9am to 4pm. The site is open rain or shine and it is best advised to dress for the weather. There is no pre-registration necessary to visit Penn Dixie.

The fossils that participants will most likely find at Penn Dixie will be marine creatures such as trilobites, brachiopods, and corals. These creatures lived at the bottom of the tropical sea, which was located 20 to 30 degrees south of the equator at the time. 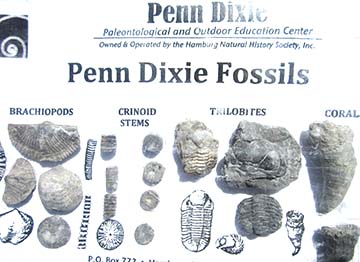 Penn Dixie open up its grounds to everyday visitors, and also holds tours for school visitations, day care centers, church groups, colleges, different health care services, and businesses. The tours may last up to two hours and are led by trained staff who provides informational presentations and guidance to those new to the Penn Dixie site. The site also offers in class programs to teach students about the fossils and wildlife that reside at Penn Dixie. The programs last up to an hour and the students are given the opportunity to see an actual fossil.

Penn Dixie specializes in the discovery of fossils but they also pride themselves in the abundance of rare birds that reside there. According to the Penn Dixie website some of the birds that have been spotted at Penn Dixie are the Bald Eagle, Cooper’s Hawk, Great Horned Owl, Blue Jay, and many others. In addition to the diverse bird life on the grounds, there are other types of wildlife that call Penn Dixie their home. Some of the wildlife that inhabits Penn Dixie are coyotes, snakes, frogs, snapping turtles, deer, and turkeys. 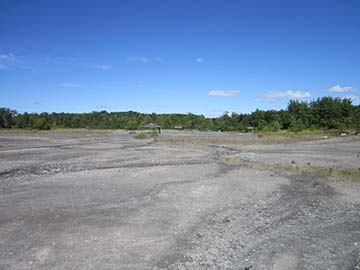 Penn Dixie’s mission statement (found on their website) is as follows, “The Hamburg Natural History Society, Inc. was founded in 1993 to promote the study of the natural sciences with an emphasis on the field activities associated with the geological and biological sciences; to preserve, develop, and administrate the Penn Dixie Paleontological and Outdoor Education Center in Hamburg, New York; promote a regional fossil site to foster and encourage a medium for the public to study, collect, and keep all the fossils they find; provide an educational resource for children and adults, of all ages and mental and physical abilities, to have a hands-on experience investigating the geological, astronomical, and natural at Penn Dixie; encourage and promote upper level training of in-service and pre-service teachers; to promote a unique and classic natural resource that instills pride in our area and attracts visitors to the Buffalo/Niagara Region to a cultural, educational, recreational and tourism attraction that has a positive economic and quality of life impact on Erie County and the Buffalo-Niagara Region; and to aid in obtaining and administering funds to promote the study of the natural history in the Western New York Region.”

Penn Dixie prides themselves in being a fun, enjoyable place for people to learn and share time together. “I love going to Penn Dixie. Although I’m only 13 years old I want to be a scientist when I get older. When I go to Penn Dixie I feel like I already am one! Plus taking home the fossils is awesome,” said Sara Schaffer, Penn Dixie member.

All photos were taken by Mollie Schaffer.