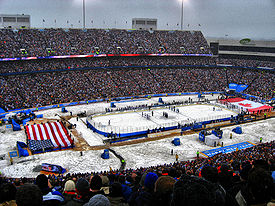 Opening Ceremonys - Wikipedia The Ice Bowl is the name given to the 2008 NHL Winter Classic played at Ralph Wilson Stadium in Orchard Park, January 1, 2008 which set an NHL attendance record of 71,21. The game pitted our Buffalo Sabres against the Pittsburgh Penguins which we lost 2-1 (:>{.

Winter … and the Fourth of July.

The outdoor game ... honors both of Buffalo's vaudevillian seasons: It will be a wintry mix of fireworks and thermal underwear.

That's because in Buffalo this game is more than a mere event. It is a celebration of the city, its hockey culture and its Northernness.

"My wife has a saying," Falla says. " 'Anyone can love summer. To love winter you have to carry your sunshine around with you.' "

That's why Buffalonians will bring buckets of self-generated sunshine to their Winter Classic. The Fourth of July is about love of country. New Year's Day will be about love of hockey and family and the hard-won joys of hard ice under a winter sky." 1